Have you ever tried laying one tangle over another? I don't do it often, but it can have a wonderful effect, adding a textural element.

Here's a very simple example, Munchin over parts of Munchin. I've done it in the four corners here, but you could do this along one edge to increase the shading. It could also create a little variation if you end up with too many of Munchin's corners' gathered lines coming together. 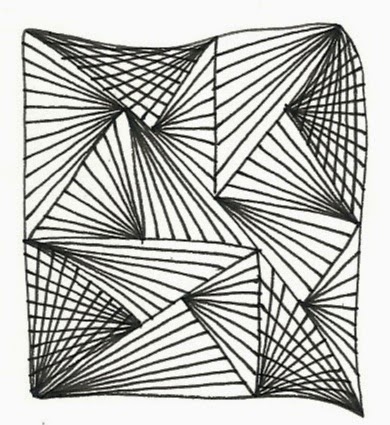 I find that tangle patterns composed mainly of lines work best, although some small black areas are fine, and often a nice highlight.

This example is over-the-top, but it shows some ideas. Clockwise from the top: Dust Bunny over Dansk, Tri-dots over Printemps, Cheesecloth over Circfleur (center), and Tipple over Gneiss. For the sake of example, in this case I did the overlaid tangle using a 05 nib and the base tangle in 01. 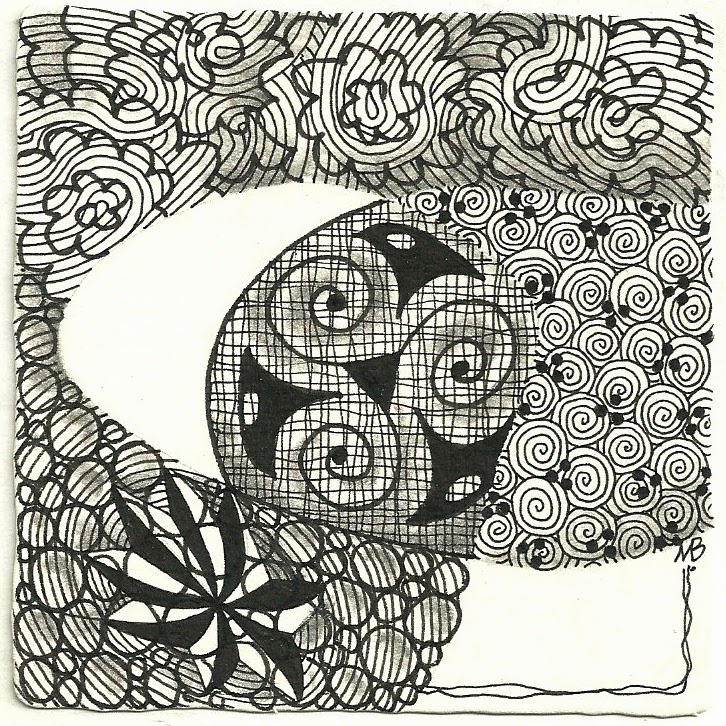 Here's a piece that I hoped would look like a small creek or stream. I started with Tipple in ovals for the stones, then decided Roxi would be better for some of the larger ones. Then, a gray wash, and Tidings in white over top of the 'pebbles'. It doesn't have the effect I wanted; the water looks as if it's above the plants (I'll try again), but I learned some and it's a good example of overlaid tangles! :) 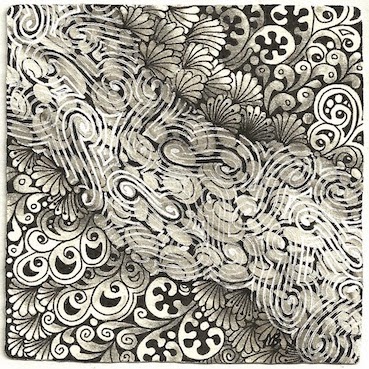 I've used this technique to lighten, or occasionally darken, an area in a piece of zentangle inspired art, usually in color. I seem often to use Printemps. It's simple lines, no large solid ink areas, but the lines are curved so the pattern isn't immediately obvious. Below is an example on a Renaissance (tan) tile of white Printemps over light blue Printemps.

Here's another example of Printemps over Printemps, this time using purple ink over blue and pink inks. The purple Printemps adds a little shading at the edge and in the blue spiral on the right.

In my experience, if you want the lower pattern to be recognized (sometimes it might not matter) the top pattern should have less to it than the pattern underneath. Here I used white Tri-dots - a very simple tangle - over pink Printemps, as I wanted Printemps to be recognizable.

I had done a tree on a tile and quite liked it, but it was too subdued (read: dark), even with some of the brighter colors I'd used. I added white ink, in simple lines, over each of the droplet shapes. In some cases it really disguises what was there originally, but that's alright. The color is still there, and it's much brighter. I did the same thing on the bands of the trunk. Not really a tangle over a tangle, but the same idea. 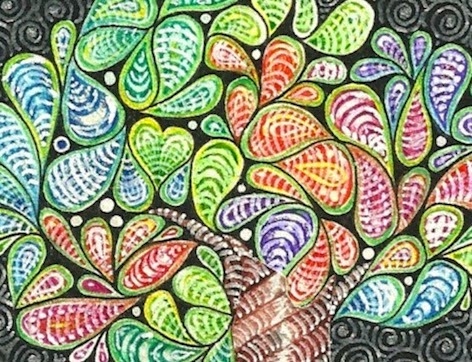 Finally, here's a piece where the sky is Printemps in medium blue, overlaid with Tidings in dark blue. I used little circles instead of ovals in Tidings and filled them with gold ink. Then I used Tidings again in the foreground to give the same texture as the sky, helping keep the buildings distinct.
If you'd like to try this, there is an abundance of tangles composed mainly of lines that could be used. My favorites seem to be Printemps, Tidings, Dansk, Sand Swirl, and Tri-dots for something very minimal. Tri-dots with a lot of Auras would work too.

With different colors it's easy enough to keep the two tangles separate as you're drawing. With black and white you might want to try two pen sizes, or change the scale between the tangles, or use tangles that are different in nature such as Florz and Sand Swirl.

Have fun!
Posted by Margaret Bremner, Artist at 11:38 AM 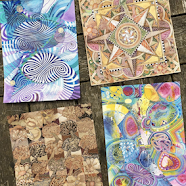