PARADOX, and then some

Here are Zentangle's instructions for the tangle Paradox, from the February 2008 newsletter. 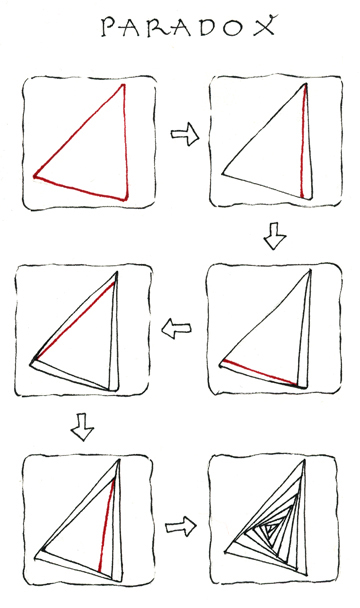 Paradox is one of my favorite tangles and I seem to do it rather well. Perhaps those two things are related! :-)  I've been asked about it occasionally, how did I do this or that. I thought about doing a video but that's just a bit more than I can take on right now. So I decided to post some tips and ideas here, and hope to make them clear enough.


TIP #1:
The elegant curves show best if the lines are close together. See the difference.

TIP #2:
Agh! But what if you accidentally leave too much space between some lines? Simple! Just add a line or two between the ones that are too spacey, like this:

Then again, never say never. I tried deliberately leaving wide spaces that I then filled with other tangles. You can see the results here.

TIP #3:
Paradox works best in triangles or squares. It's not bad in a pentagon but gets worse and worse as there are more and more sides. For one thing, the center deteriorates quickly as you move in. Besides, drawing a fairly regular shape with more than four sides, freehand, is quite a challenge. Stick with squares and triangles.

TIP #4:
There are two looks that can be achieved with Paradox. In my classes I call them "Fans" and "Twists". Here they are: 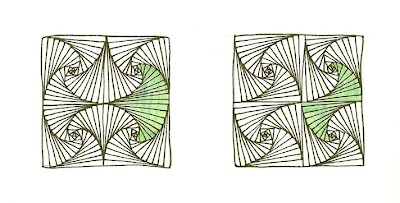 Paradox is essentially a square or triangular spiral. These two effects are obtained depending on which direction you send your spirals.


TWISTS: Regardless of whether you spiral clockwise or counter-clockwise, if you spiral in the same direction in every section you'll end up with twists.

FANS: To get the fans you need to spiral in the opposite direction from section to section.

If you prefer to be less technical and more intuitive, you can look at what's happening in the section adjacent to the one you want to work in, and note where the lines need to converge and where they need to splay out.


TIP #5:
Munchin is a tangle that flows particularly nicely placed next to Paradox. Others that could work well this way are Tri-po, Facets, possibly Hibred (scroll down the link). I can also see possibilities for Tripoli (another of my favorite tangles) and Betweed.

THEN SOME #1:
Paradox also makes a nice border design. Start with a row of squares or triangles, then decide whether you want fans or twists.

THEN SOME #2:
An interesting variation is to fill in every other stripe. Don't do this going around the spiral the way you did the tangle. It's too easy to get confused that way. Begin on one side and fill in to the center, then move on to another side. 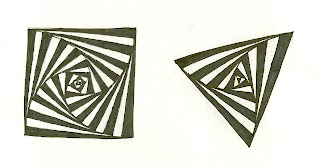 THEN SOME #3:
The triangles or squares you use don't all have to meet neatly at the corners. Interesting things happen when they're placed randomly. You can also use a mix of triangles and squares. 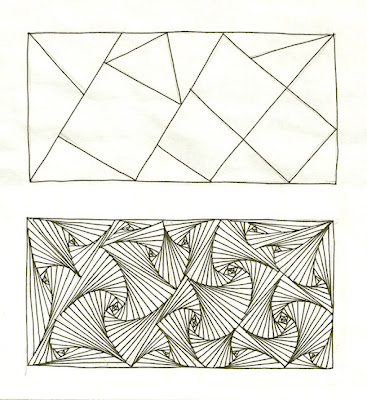 THEN SOME #4:
Sometimes when I'm doing Paradox using squares there's an odd-shaped section, like a trapezoid. (What a great word!) I've found a few ways of dealing with this challenge.

One thing you can do is separate that end bit and deal with it on its own. This leaves a triangle and you can fill it in a number of ways: 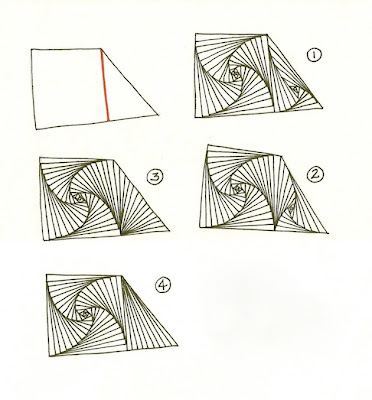 Another option is to fill the odd shape entirely with Paradox, adding an extra line or two occasionally as you're spiralling around. You need to think about the direction of the spiral in order for the extra lines to fill the proper space. The aim is to get the (temporarily) empty center area looking more like a regular square.

THEN SOME #5:
Never say never, right? While the classic Paradox is done entirely with straight lines - thus the paradox - it can also be done using curved lines. It takes a little more concentration.

THEN SOME #6:
If you're feeling confident, here's something to try: partial Paradox! This requires imagining what's not there, but (of course) it doesn't have to be exact or perfect. Here you can see:


1st: a string
2nd: other tangles (Crescent Moon, Florez, Keenees, Prestwood, Tripo), with two sections left blank. The solid green line makes a nice square in the section where I want to put Paradox. Normally I'd draw it in black. Then there's a dotted green line where I need to imagine the far edge of the other Paradox square.
3rd: one and a half Paradoxes and the final section filled with Gingham

THEN SOME #7:
Paradox in a paradox. See the Paradox section in the lower left of the tile below? Going from the point in the center, there's a Paradox triangle, a Paradox square, and a partial Paradox. In the square section I did Paradox until about halfway in, then, I reversed direction! Cool!

Here's a pencil string, some notes about what I did, and the Paradox result:

I was about to throw out all the examples I did for this post when I thought, "Hmm. Let's stick 'em all together and see what happens." So here it is, the all-in-one (minus one) Paradox visual tutorial! 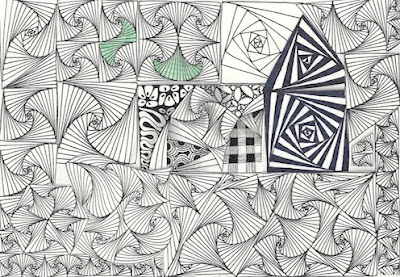 HAVE FUN! (and congratulations to anyone who stuck through it to the end!)

August 2011: For another take on Paradox, using a two-sided shape (how cool is that!) see the Zentangle blog post for August 26.
June 2012: for a cool variation that I call feathered Paradox see my blog post of June 22, 2012
August 2018: See Rick Roberts' post "Paradox Metaphors" here.
April 2020: Another variation, Crazy Paradox, here on my blog.

Posted by Margaret Bremner, Artist at 3:56 AM