Shattuck, and then some 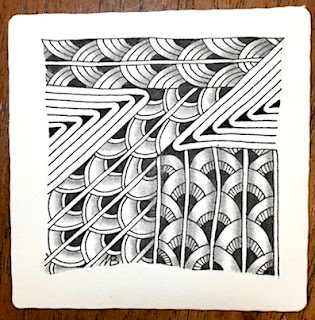 Today we'll look at Zentangle's Shattuck. It's generally drawn with curved lines, resembling scales, and I prefer the 'scales' to match at the tops and bottoms so that's generally what you'll see here.
It can be done with straight lines instead, as shown below. If you choose this look, you may want to draw a zigzag along the wide stripes, and then fill it in. 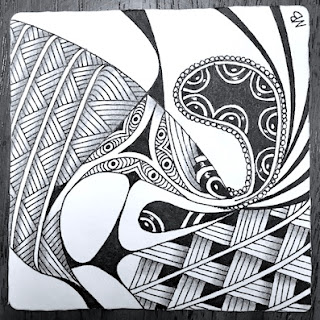 Usually the dividing stripes are quite narrow, but try drawing them wider and adding another tangle inside. There are so many 'border' tangles to chose from! I've kept it fairly simple in the tile below. 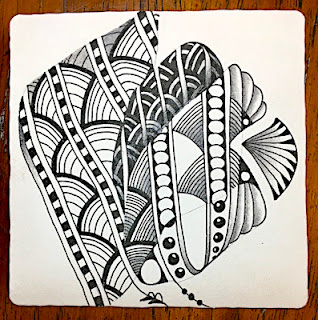 Two other options for the dividing stripes are to fill them black or to draw them more like ribbons. In the tile below I've also used a variation of Moon Pie to fill some of the scales. (In the link, scroll down, past Hollis). 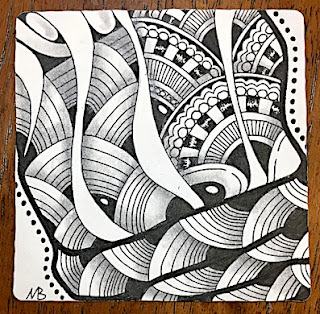 Moon Pie is one way to vary the scales, but you don't need to be quite that elaborate! The tile above also shows examples of gradating lines, an effect I quite like. Look at other examples in this post to see other variations of the scales. Here are a few more ideas:

Another thing you can do with the scales is to fill only half of them, another attractive effect.

Or... fill half of the scales with one pattern and the other halves with a different pattern. 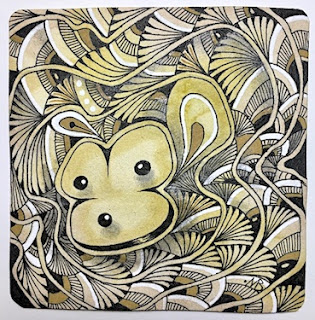 To end, here's a gray tile, with gray gems, Shattuck, and more.