As you may have guessed, I've been enjoying playing with the new tangle Ing. With very straight lines it's quite angular and somewhat bold, but the lines don't need to be ramrod straight; they can curve a little. Here's a tile by Laura Sanders, a CZT in South Carolina USA, where she curves the lines slightly. Even those very slight curves make it more flowing. 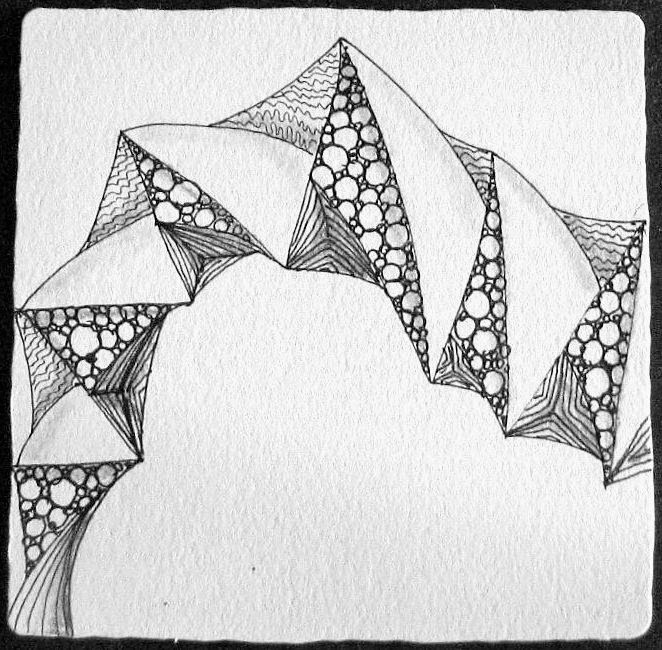 What would happen if one used really curvy lines rather than straight ones? I thought it might look like waves. I tried it in five diagonal bands, leaving a space between the rows. Some leaf shapes appeared, and I filled in the two corners. The 'Pearlz on black' sections are often between two rows of curvy Ing. So, not waves so much, more like ribbons, but it certainly has quite a different look from the original Ing!
Essentially, all it involves is beginning with a rolling zigzag rather than a pointy one, and curving the two lines you add in each 'V' of the zigzag. You can sort of follow the curve of the original line. Like this:

I thought that - just like angular Ing - it would probably work nicely as a border and had a Renaissance tile with a pencil border at hand. (I admit to using a circle template for the two largest circles in the middle! Don't tell anyone.) I really like this tile!
Finally, here's a tile with angular Ing at the top, angular Ing with Rounding at the sides, and curvy Ing at the bottom.
If you missed them, you can read my first post about Ing here, and about using Ing to make stars here.
Posted by Margaret Bremner, Artist at 7:22 PM