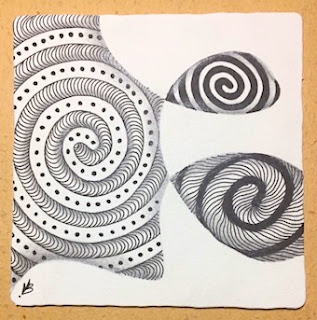 Marasu is a tangle that resembles a coil of spool-knitting - do you remember that craft? This tangle is named for Maria Thomas' three sisters: Madeleine, Rachel, and Susan. In Marasu there is one pattern on the coil and it is really brought to life with shading. Here's a wonderful example of Marasu from CZT Sonya Yencer: 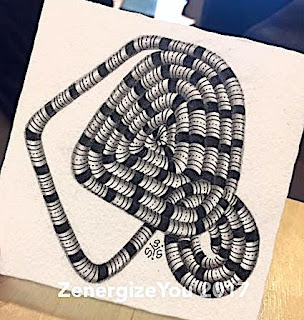 And here's one of mine (which could use more shading).
You'll find step-outs for Marasu here.

Today I'll show you a way to involve two patterns, two 'spool-knittings' coiled together. You may notice this double coil in some Celtic art.
It's really quite simple. Begin with an 'S' and add to each line, alternating lines, to the edge of your section. Always begin the next line at the line-end nearest the center.

Then fill one coil black, or with thin lines, or both, or a pattern, or... the sky's the limit!

They are quite interesting bumping against each other. These are fairly small spirals.
In the tile below, the whole design is a double Marasu, fitted into a loopy string I had. There is a second double Marasu at the central end of the lighter coil.
I occasionally participate in the Travelling Tangles Project on Facebook. This is a tile I received from Sue Olsen, a CZT in Ohio. One of the things I added to complete it is the double Marasu with rainbow stripes.
Here's one I tried in pink on a tan ATC. My idea was to try to combine the double Marasu with Romanancy. It didn't work because the dark and light stripes don't meet nicely. I tried to remedy that by adding the dark purple lines to even out some of the 'meetings'. It helped a bit. 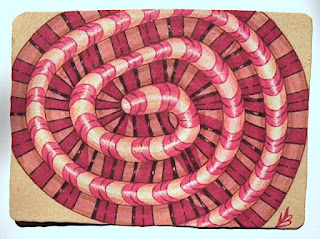 There are lots of possibilities with double Marasu.
• Try it as a square instead of a circle (begin with a squared-off 'S').
• Giving your initial 'S' a large half and a small half results in different widths of spirals.
• Doing large spirals gives you space to add a line around one, or fill one with another tangle.
I hope you enjoy experimenting with this variation of Marasu!
Posted by Margaret Bremner, Artist at 11:51 AM