One day I decided to cut a paper stencil and use it as the string for a zentangle-inspired mandala. After tracing the stencil onto the paper I planned to draw on, I crumpled it and threw it in the trash.  A few days later it occured to me that it might be interesting to have a record of that part of the project (I'm a bit slow). I retrieved it from the trash and attempted to flatten it. It had to sit under a pile of papers for several days before it was photoworthy.

Here's the paper stencil I cut: 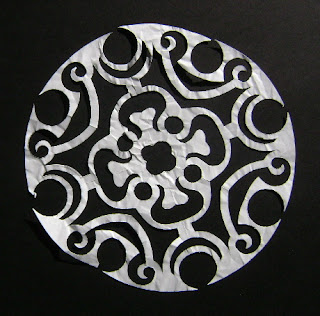 Then I got out my pens and went at it. At first I wasn't happy that it looked divided in four - rather than the eight I had expected - but now I quite like it. It's different. And now that I look at the stencil again I realize that it IS more of a 'four' division (did I mention I'm a bit slow?).

For some reason it looks sort of Italian to me, so I called it "Italia".  Here it is:

This was quite fun, and a different approach to the string. I plan to use paper stencils again and see what happens then.
Posted by Margaret Bremner, Artist at 1:19 PM