Procrastination is my middle name

It always has been. But I thought I was getting better at not procrastinating. I have a special project I've been wanting to start (see my C & R post) but I seem to be finding all kinds of other things to do instead.

So for your edification and amusement, and my embarassment and humility (and perhaps a boot in the rear), here are some of the things I've been doing instead:

Number One:  Moving
Three years ago my husband and I sold our house, sold some stuff, stored a lot more, and went to China to teach English. We were there two years, in two different cities. It was quite an experience and I'm sure glad we did it. Coming back to Canada, we initially stayed at my father's very cluttered home. That stretched to over a year and we REALLY NEEDED our own place. A friend has taken a position overseas for a couple of years and we are renting his bungalow. Yay! And we've emptied the storage unit! 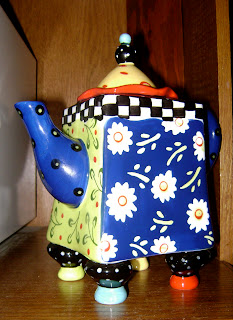 Number Two: Buying a teapot
I expect we still own a brown betty teapot in the apartment our middle daughter is staying in, but she's probably using it on occasion. Besides, I wanted something more fun and funky. Found one! Ta-da! ----->
Unfortunately it pours a bit sloppily, but it makes tea and it IS fun to look at!


Number Three: Blowing my nose
A lot. And also having coughing fits. There's a virus going around here that requires a lo-o-ong time to regain one's energy. 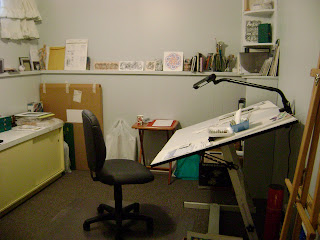 Number Four: Setting up a studio in the basement of our new home. It's coming together. There are SO many ideas bumping into each other in my head!

Number Five: Unpacking boxes, which is kind of fun. There's the occasional "Oh yeah! I like THIS!" or "Oh. What did we keep THIS for?"


Number Six: Retrieving things from various other places we'd stashed stuff during our Oriental adventure. We've emptied our storage unit, but still have things in my brother's shed, my dad's basement, and my in-laws' storage unit. Also, re-stashing things we can't use or don't want at the moment.

Number Seven: Doing OTHER art projects
For example, AN EARLY SNOW, which is somewhat whiter that it appears here and includes some tiny clear and blue gems for sparkle. This year, in fact, we had late snow.

I don't have a name for this one yet, but I love the whirlyness of it.  I'd like to do a similar one in black-and-white. 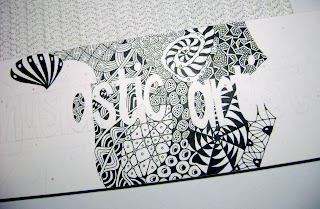 Number Eight: Blogging
Sheesh! Here I am telling you all how I'm not getting around to a project I really want to do!
Oh, and I've also been experimenting with fancier header bars for said blog, one with several images of my artwork, and a zentangle one ----->


I've wondered if it's not procrastination, but fear. I want so badly for this project to be terrific! Another Certified Zentangle Teacher suggested that it could mean "False Evidence Appearing Real".

There's a month until the wedding. I still have time.
I can still get it done.
Can't I?
Posted by Margaret Bremner, Artist at 3:49 PM