We've recently moved, closed our storage unit after three years, and have been unpacking boxes. One item I discovered was this apple corer/slicer.

I don't recall ever using it for that purpose (amazing how Stuff accumulates, isn't it?), but it struck me as a quick and easy stencil for a mandala. 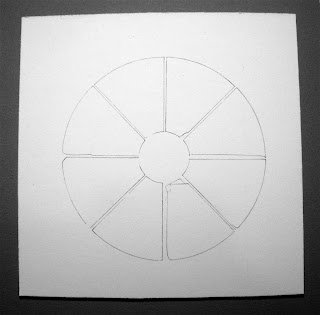 I planned to fill it with zentangle patterns. It's a bit too big for a nine centimeter 'tile' so I used slightly larger paper (13 cm/5 inch). I penciled the eight sections. The corer isn't level and slips around a bit, so the divisions are uneven, but that's part of the charm of Zentangle isn't it?

I used a lid to add another circle inside the outer one. You'll see the zigzag border on the first finished piece.

Below is the first one I tried. You can see where I added the other circle with a lid. I left the center empty and I find it rather striking, probably because it flows into the empty areas in the next ring out.


Here's my second go at it. Again, I added another circle by tracing around a lid. This time I filled the center with Tipple.


Then I got really enthusiastic and decided to add color, a border and a true string to the mix. I didn't add the extra circle, and it ended up being much less a mandala. I think it looks like a small glowing thing so I call it "Ember".


Is there an apple corer in your kitchen that should be with your art supplies?

(This post is, at least in part, for Laura Harms, CZT who's had a crazy week and has been wanting to draw circles a lot. Circles are an ancient protective symbol.)

This work is licensed under a Creative Commons Attribution-NonCommercial-NoDerivs 3.0 Unported License.
Posted by Margaret Bremner, Artist at 9:53 PM