Linda Farmer, who maintains the Tangle Patterns site, recently issued her own zentangle challenge: to tangle your name. No, not what you might think. The idea is to find tangle patterns beginning with the letters of your name and do a tile with those patterns. I planned to use:
Meer
Avreal
Raddox
Gneiss
Amaze
Rain
Ennies
Tortuca

I began with a border and string. The string was in the shape of an "M". I needed 8 sections for all the letters so I divided it in half horizontally. It soon became evident that I can't count. I had 10 sections. How did that happen? Maybe I could include my middle and last initials? I considered leaving two sections empty. I was obviously off to a good start.

Half of the tangles I'd never done before. I flubbed Avreal by putting the lines going the wrong way. In Gneiss I somehow got an odd number of sections, which is unworkable. I wasn't too pleased with Tortuca either. Fortunately, Amaze is hard to botch.

"B" for Bremner. Also for Bronx Cheer. A very appropriate tangle to include! This tile was going off the rails so I thought I might as well blow up the track. The raspberries would to be red, glued on, and they would hide some of the flubbed parts. This was starting to be fun instead of disappointing.

I retrieved some grocery flyers from the recycle bin and looked for raspberries. Of course, it's not raspberry season. No raspberries to be found. I'd have to make do with trimmed, imported strawberries. I added stems. I did my initials large. And now, presenting... my name tangle tile fail! 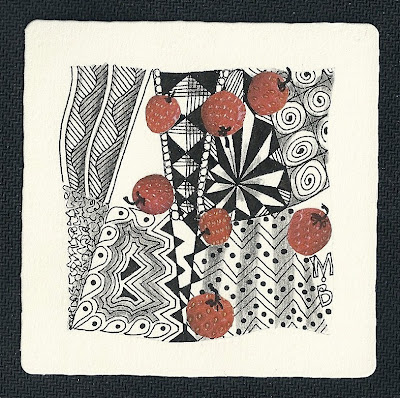 I had to take another shot at it. I planned better and had eight sections to fill. I used the same tangles. In the end, I like Amaze and Avreal is okay. Gneiss is indeed nice, and bold, and I will use it more. I've really liked Raddox for a while, and I teach it but rarely use it. Maybe it will show up more frequently now. Still not big on Tortuca. Here's the MARGARET tile that passed: 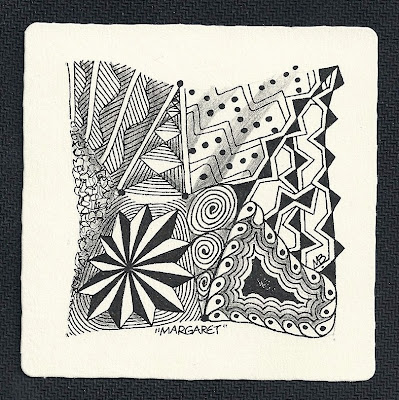