Peter Donnelly has three or four hours between tides to produce his artwork. He's based in Christchurch, New Zealand and his canvas is the sand at the beach. He's working down on the beach, of course, and doesn't have an arial perspective of the large images he's making, but he says he's always been able to picture things in his head. 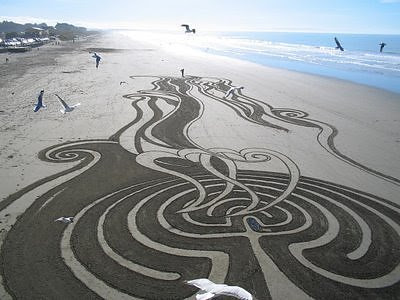 Donnelly's work echoes the philosophy of the Tibetan Buddhist monks who create sand mandalas and demonstrate the impermanence of everything. He knows that it's all temporary and does it anyway. In one video he mentions that he has created 697 works in nine years. You'll see swirls, checkerboards, teardrops, spirals, words, human forms, labyrinths and more. Zentangle enthusiasts will recognize a kindred spirit who also works dark on light, taking the lines and patterns wherever the spirit moves him, albeit on a much larger scale!


Watch a 10 minute video of Peter Donnelly and his work here.
See some still photos and another video, and read a bit more here. 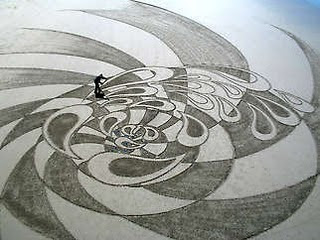 Posted by Margaret Bremner, Artist at 10:15 AM