While visiting our daughter in Halifax we spent a couple of hours at Doull's Bookstore. One website called it "a second-hand bookstore that is a dark and musty extravaganza of disorganization". I would add "delightful", but I'm a second-hand store sucker.

I spent all my time at the front of the store poring over their art section. In one book - which I didn't want to buy just for this - I discovered a lovely pattern from a 700 year old Seljuk Turkish carpet. I fished out my sketchbook and copied it (along with two other patterns!).

Here's the page from my sketchbook: 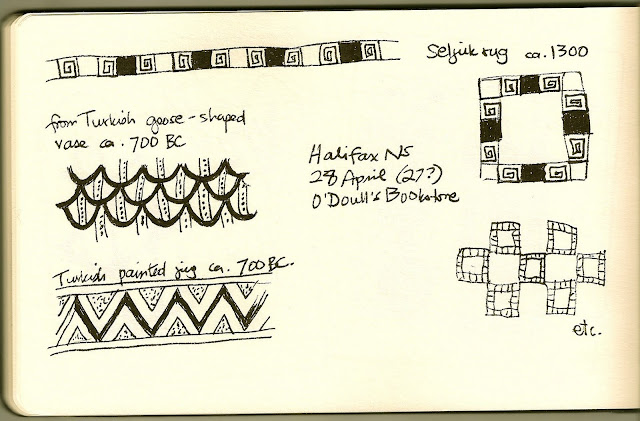 It's a border pattern and if using it as a long border all you have to do is a series of squares, then fill the squares in this order: square spiral, white, square spiral, black, and repeat.

On the rug it was done around the edge of squares (upper right), then the squares were tiled alternating with another pattern (lower right), à la checkerboard or Knightsbridge.

Around the perimeter of a square, be careful to make five small squares on each side. I didn't notice what the ancient Turks had placed at the center, but there are lots of tangle possibilities. Here's how to do SELJUK: 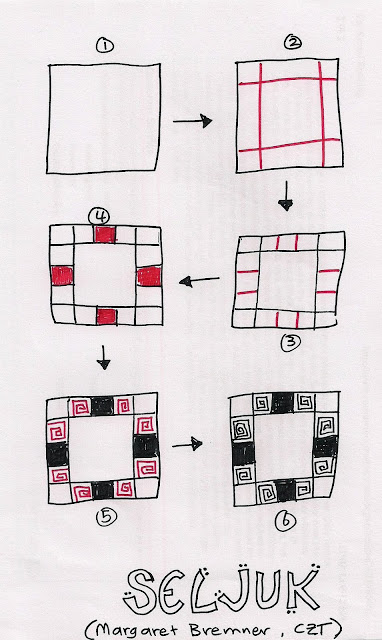 I tried it on some tiles. In the first (complete with fingerprint smudge) I put a square spiral in the wrong place right from the get-go (lower left), so I did square spirals in ALL the little squares and vowed to concentrate more the next time (upper right)!


I've really been wanting to use white on black but rarely seem to get enough black on a tile to warrant it. (Maybe I'll just start with a lot of black next time!)  In this tile I used some white ink dots in the black areas to soften the edges. I also used white on the black squares of Seljuk (bottom edge) because that tangle was too prominent.


The next tile has some variations on Seljuk. Some of its small squares are checkered; some of the black ones have white square spirals; one is striped. I wanted the inner square to stand out more so I added white to some of the black areas in it, and shaded around the outside edge.