This lovely tangle was created recently by Rho Densmore, CZT.  Fiore di Pietro is a beautiful tribute to her brother-in-law Peter who passed away unexpectedly. You can read about that, and see the drawing instructions, on her blog here.

It took me a few tries. I could get the circles lined up alright, but the diamonds wouldn't appear. Then I realized that my large circles were too small; they had to be BIG!

First I'll show my third effort, the one I'm really pleased with, done on a blank Zendala tile. I also used another of Rho's tangles: Providence. I used five colors of pens plus gold and clear glaze, and three colors of pencils.

Here's my first attempt: a bit weird, but interesting.

On the second attempt I realized that the big circles had to be way bigger, so I drew a second circle around each of them and re-drew the diamonds. Making progress. :)

I finally got the hang of it! I like these two very different versions of Fiore di Pietro. 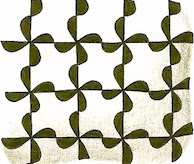 NINJA STARS (one of my earliest deconstructions)