Celtic triquetra as a string


TRIQUETRA comes from the Latin for "three-cornered" and originally referred to a variety of three-cornered shapes. Nowadays, it refers exclusively to a more intricate shape that is often found in Celtic artwork. It is formed from three vesicae piscis, interlaced. It's not unusual to see it with an added circle.

While Christians often use it as a symbol of the trinity, the triquetra has been used - long before Christianity - as a symbol of things that are threefold: infancy/adulthood/old age, mother/father/child, earth/sea/sky, the virgin/mother/crone of the Celtic goddess, etc.. It has been found on old Germanic coins and on northern European runestones. Here is a slightly different triquetra design on one of the Funbo runestones. 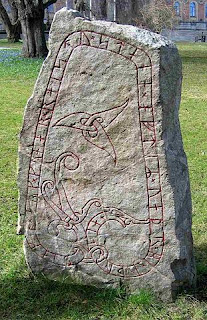 I've been learning a bit about how to draw Celtic knots recently. The triquetra is the simplest knot and makes a simple, interesting string to begin a Zentangle. I was quite pleased with the results. The biggest challenge for me was to place an equilateral triangle in a square! At the top of this post is the first one I did. I was intending to use Sue Clark's tri-shape string, thus the square in the background, but the circle didn't make it! I found the triquetra a bit small in that one, and in my next effort I filled the entire tile with it.
The trefoil is a related image; simply round the three outer points of the triquetra. You can see a tile I did with a trefoil, and a two-pencil string, at the end of this post. I will attempt other, more intricate knots. Stay tuned!
Posted by Margaret Bremner, Artist at 11:06 AM