Encouraged by friends who were raving about it, my husband and I found a fabulous deal (75% off!) and decided to travel east by ViaRail. It was wonderful!!! Two days and two nights of delicious food, being rocked to sleep, lovely and varied scenery and board games with friends. We went from Saskatoon to Toronto and will definitely do the train thing again. Here's the pattern on my comforter on the train. 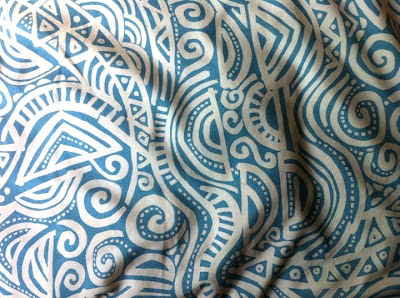 We spent a few days in Toronto and Guelph visiting relatives, then on to Ottawa, again by train (cheaper than the bus). We lived in the Ottawa area for many years and stayed with friends. My brain actually worked well for once and I'd been planning - with someone in Ottawa - an Introduction to Zentangle class on the Tuesday evening. There were 19 students, one of whom had come from Sudbury, about a four hour drive! Her young granddaughter lives in Ottawa and came to the class too. Our hosts both came and my husband tried Zentangle for the first time.

Here's a not terrific photo of the first tiles everyone did. I overheard one student say to another, "Hunh. Who knew I could draw?!" 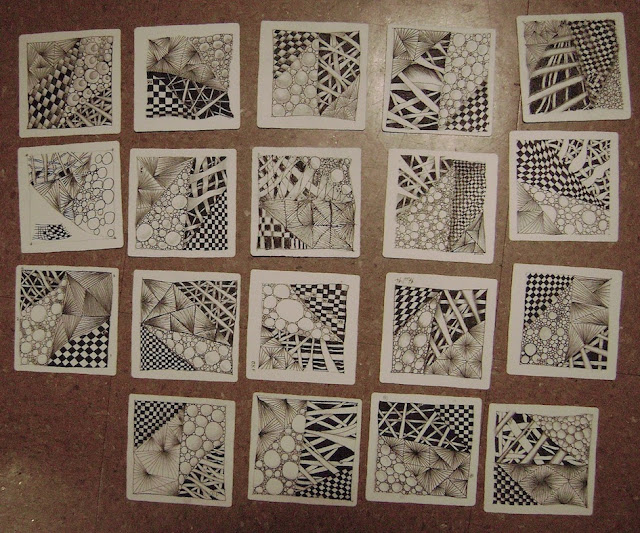 Then to Montreal, where we lived for five years many years ago. It was lovely to hear and use French again. For a few days we attended the annual North American meeting of the Association for Baha'i Studies, which moves around the continent. One of the women in one of the sessions I attended had this handbag. It reminds me of the tangle Dansk. I want one, too! 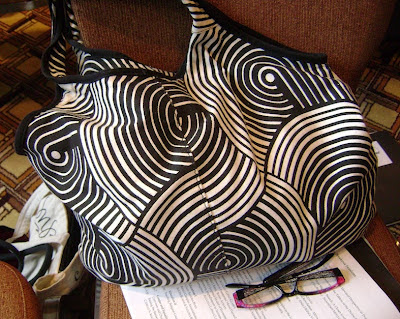 A few of my Zentangle students from Ottawa were also at the Montreal conference. One tangled the back of her name tag card and another carried around the muslin bag of supplies I'd given everyone. Addicting? Nah!

We had a great two-week vacation and would have taken the train home but couldn't get a good fare until the end of August. We just couldn't wait that long. But we brought home two dozen Montreal bagels. Yum!
Posted by Margaret Bremner, Artist at 9:48 PM