Last week I showed some zendala tiles done with a template that looks like a sphere. I didn't like the last one I showed, so I cut out the middle and promised to show you what I did with it.

I've been working on this mandala for some time. It's 14" square. I'd made three rescue attempts already but I think this last one is working! I've added some collage and a fair amount of white ink. 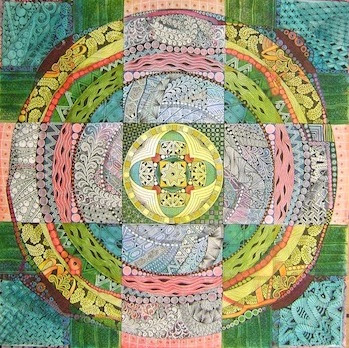 I had started drawing a center (shown above), but found I preferred the cut-out from the zendala tile there and so did my daughter and husband! Coincidentally (really?) it was within a millimeter or two of the size of the middle of the mandala! But I also liked what I'd already drawn. This mandala is on illustration board, so with an X-Acto knife I carefully cut around the circle and peeled it off. Now I have another lovely little tangled circle to do something with.
I glued the new center on, and also changed some too-dark-reddish areas towards the corners. (Now they're too light! Oh well, I can deal with that.)
It's not finished  yet. There's still a bit more collage, some fine-tuning and some touching up to do.
Posted by Margaret Bremner, Artist at 7:01 PM