Judy West posts a Celtic challenge every two weeks. I usually don't manage to participate, but #31 appealed because I'd have a sampler showing a good selection of tangles that are linear, for thin places and border ideas. FORTY tangles in fact! It will be a handy reference.

I copied the knot in pencil onto a 9" square of paper. I wanted it to have an even more Celtic look when I was finished so I chose some "Celtic" colors: red, blue, green, and brown and added a few small circles for 'jewels'. I caught myself in time and was able to organize the tangles: 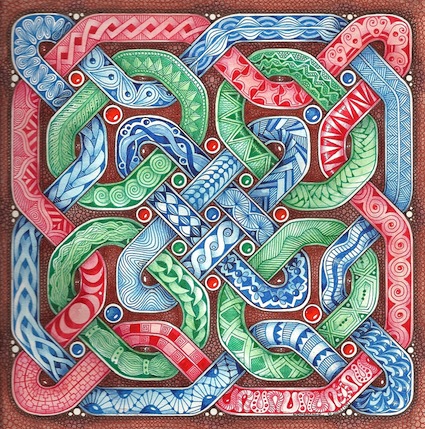 Tangles that I designed : Chebucto, Copada, Ionic, Lamar, Many Moons, Prestwood, Seljuk, Zedbra as well as Ninja Stars and Screen, both of which are not linear tangles, but most square grid tangles can be used as a single row to make a linear pattern. Plus, of course, Black Pearlz; I can hardly do a piece without those!