I recently discovered a lovely café au lait colored Stonehenge paper in an 11"x14" pad. It's darker than the tan tiles from Zentangle, and I looked forward to doing some larger work on brown. I also had a small piece of printing styrofoam that I've had for years thinking "I must use this sometime!" but never have, until now.

I divided one sheet of paper into equal thirds. I drew some quick house-y shapes on the styrofoam. I used thinned, brown acrylic paint as my printing medium and printed the same styrofoam plate each time on the three papers. Here's the styrofoam after being used.

I was interested to see how different the three drawings would be, once completed, all beginning with the same basic print. Sort of like a zentangle class where everyone starts with the same string and the same tangles but after that individuality reigns! Here are the three monoprints I started with: 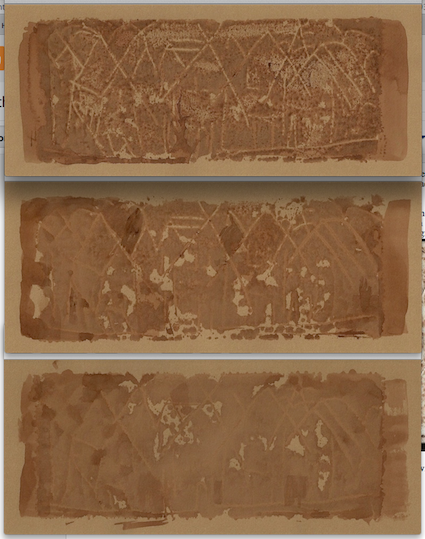 Nope. They don't look like much do they? But, take some time to tangle, and...