One of my favorite types of challenge, a duotangle. The term was coined by our Diva on her blog. The two - and only two - tangles we are to use are Bunzo and Dex: a curvaceous one and a square grid one, a good combination.

First, I thought I'd try having Bunzo come out of the hole in Dex. You don't really get that impression but I was still pleased with the tile. 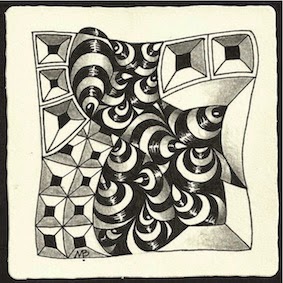 Second, I had the brilliant idea of using Dex in the alternate stripes of Bunzo. It's not quite a brilliant as I imagined, but still interesting. 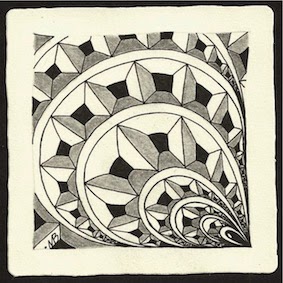 Third, I used Dex as a string. I wanted to honor the dark/medium/light tones of Dex and that meant I needed a darker than normal Bunzo. On one half I did thin white stripes with wide black ones; on the other half I added a single line through the white stripes. Then I needed to make half the border light and the other half dark. I think it worked quite well. 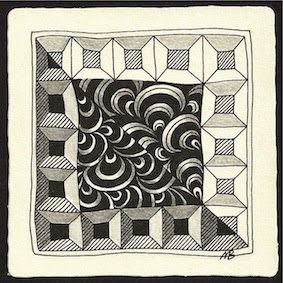