A backlog of diva challenges

I've been travelling this summer, and thinking about various large projects that need my attention, so I haven't been posting challenges as they come. Here are a few - better late than never.

First, Daniel Lamothe's tangle Knightstar. The construction is the same as Donna Lacey's Knightspeak, however Daniel's is done in in multiple on a square grid resulting in a 'netting' look. It's quite a different result from Donna's with it's single star and checkerboard pattern. Either way, it's a really fun, visually delightful pattern.

On my first tile I definitely still had Knightspeak in mind. Some of my lines went haywire, the gray ink wasn't working out, and there is now a teeny-tiny tear on one side because I came this close to ripping it up. But the zentangle angel on my shoulder said, "Wait! No, no! NO mistakes, right? Keep going!" So I did. Glad I did.
I did want to try Daniel's method, in a grid, and had a Bijou tile handy with a grid already on it. I did some of each tangle just to see the difference: upper left is Knightstar, lower right is multiple Knightspeak. 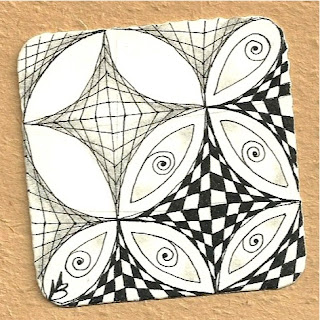 Next up, Molly Hollibaugh's tangle ING.
The original Ing tangle is angular, but sometimes I like to do the same thing but with curvy lines. It looks very ribbony. Here I've one strip (second from left) with multiple additional sections. 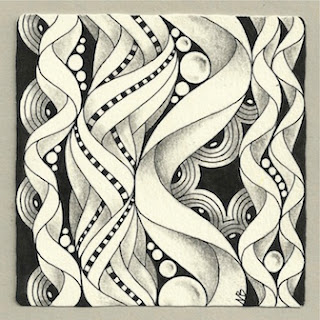 One week the challenge was to be inspired by the Olympics so I used the five rings as a string. 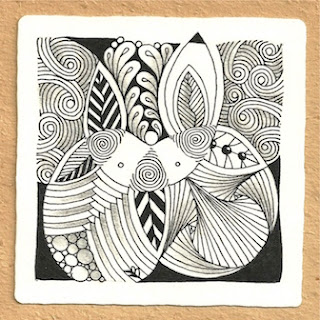 Posted by Margaret Bremner, Artist at 9:49 AM