ALOHA is a leafy tangle that's very graphic and bold. Step-outs can be found here.

On the first tile I added a gold crescent moon with some ochre pencil for a bit of shading, and used an Aloha-like fill in the Paisley Boa sections.
I had a tan tile with a blossom-like string, five petals and a center. That's rather lost at this point! I didn't realize until I was 'finished' that the pink and orange inks would look so similar on the tan paper so I outlined the whole 'flower' and added a 'stem'.
By my third go at it I was deciding that Aloha looks best on its own! Here's the beginning of my third tile, and what I added next, which I didn't really like much.

I eliminated the white around Aloha with a gray brush pen, then used a gray drawing pen for some of the tangles. I'm not unhappy with the result, but I still really like the simplicity of Aloha alone.
THE D-1 FRAGMENT fits into a  square grid but is really based on triangles. I had a slightly curvy, but still square-ish string so I began with that. I wanted to see what would happen if I continued to subdivide the triangles; that's at the bottom.
I got caught up in the triangles and tried this fragment on a couple of pre-strung 3Z tiles. The pictures show the string I began with, and the finished drawing. 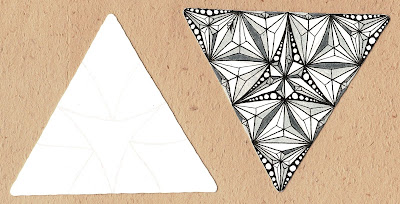 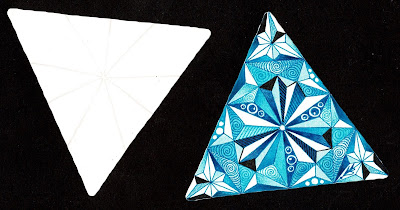 As I was working with all those angular triangles I was reminded of the tangles Ing and Fassett, so I did an ATC with D-1 and those tangles.