'My Canvas Has Laces' (2) progress report

I've agreed to 'paint' a large pair of canvas shoes for Shoe Bank Canada's fund-raising project 'My Canvas Has Laces', so that "no Canadian should want for a decent pair of shoes".
I let some ideas percolate in my brain before I set pen to shoe and thought about other aspects of the project.

Tangles
I made a list of tangles I might like to use. They included some of my own such as Skye, as well as some that are favorites like Tipple and Crescent Moon, and tangles that I thought would offer good 3D-look possibilities, just for fun, such as Paradox, Cubine, Romanancy, and Dex.

Supplies
I also assembled the supplies I expected to use, mainly black Sharpie paint pens. I had wondered about color, but decided to go with black, white, and gray, and perhaps include iridescent or sparkle paint. 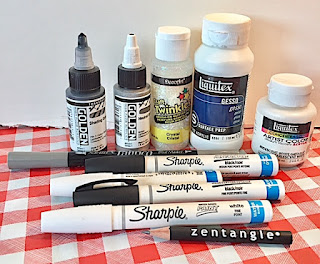 Deep black
Mmm, all those tangles where it seems you're looking through to somewhere else, tangles like Cubine, Dex, Skye, Hollibaugh, and so many more. I'd been thinking what fun it would be to give the impression of cut-through work in the canvas. On paper I frequently use Sakura's Clear Glaze pen over the black which gives the effect of a much deeper space.

Gathering my courage
I looked at the shoes from this side and that, wondered about drawing on the rubber parts, thought about the red and dark blue highlights, and then decided to follow Lady Macbeth's advice to "screw your courage to the sticking place" and just do it.

The eyelet holes are interesting design elements and could be incorporated into tangles. So, of course, the first tangle I put on the shoes is one that wasn't even on my list! A variation of Posh from Suzanne Macneill. 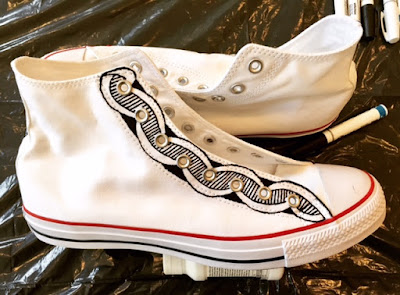 I did two more eyelet places.
Then, both my Extra Fine paint pens ran out!
Posted by Margaret Bremner, Artist at 1:54 PM