I'm a bit of a stone fan. Maybe in another life I'd have been a geologist. Here are some of my stones.

The DivaCZT's guest challenger this week is Jane Reiter from Michigan, and she's challenged us to be inspired by petoskey stones, common in her state. Here's picture of petoskey stones. 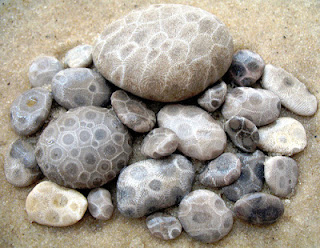 Very cool. You can read more about these stones, see some photos, and see some of Jane's work on the DivaCZT's blog post here.

Somehow 'petoskey' and 'pentagon' got mashed together in my brain, so my first effort attempted to use five-sided shapes. Looking at the pictures later, I noted that there are some pentagons, but mostly hexagons. I didn't get around to adding the dark centers because I liked it just like this.
This time I wanted to get those dark centers in there and they became large Black Pearlz. The multitude of thin, radiating lines on the stones got reduced to five. I do love those oversized black pearlz!
I decided to really try to see what was in the stones.
I noticed that the thin, radiating lines were light, not dark.
What originally looked like Perfs between the shapes, I realized was was the meeting of the thin, light lines. I tried to do that in the lower half.
Then I got funky and did another oversized Black Pearl and some strange little wiry sprouts.
Thanks Jane. This was fun! And educational. Which is also fun. :)
Posted by Margaret Bremner, Artist at 3:36 PM