I've been trying to get a handle on a new zentangle technique called tranzending. Essentially it's a method of laying one tangle over another, often giving a watery or glass-like effect. You can watch Rick and Maria demonstrate and chat about tranzending on this Youtube video.

I raided my stash of completed tiles and chose several to experiment with. On the first one I re-used the tangle Fleurette and did it over the entire tile.
On the second I reproduced one quarter the flower in a corner. I rather like both of these.
Next I tried placing one large Artoo over a tile that included Artoo in the original tangles.
I tried a larger Fengle over a smaller one. Much as I love this tangle for its welcoming of other tangles and more detail, I think that what's underneath here is too intricate to take an overlay well. There's just too much going on. 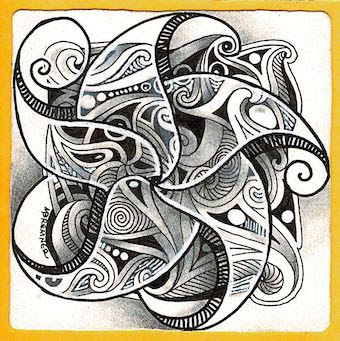 I had a fairly intricate tile, but it was the same tangle all over. I decided to try a simple tangle over it, and chose Echoism. This worked quite well I think.
Looking through some other work I realized that I'd done tranzending on a tile received from Lynn Mead in the Travelling Tangles project on Facebook. Maybe my lesson here is KISS ("Keep it Simple, Stupid").  :)
I'll definitely be trying this technique again.
Posted by Margaret Bremner, Artist at 7:20 PM