A few favorite quotations... (and art)

...interspersed with a few favorite and appropriate Zentangle tiles.

Anaïs Nin is a French author whom I suspect I would not have liked much had I ever met her. But she's the origin of one of my favorite quotations.

"Life expands or contracts in proportion to one's courage."
The drawing above is on gray paper. Whatever I'd done in the upper left corner, I hated it so much that I cut it off. I loved the interestingly shaped tile! Then a black tile slipped behind it and I preferred that, so I cut a bit of black paper and glued it behind the gray one.


Artist Robert Genn maintained a website called "The Painters' Keys" that was continued by his daughter (also an artist) after his death. On the subject of thinking and creativity he offers the thought that

"Thinking is good, but your brain
is perpetually thundering down the tracks
with intent to derail your creativity."

Life is lighter without grudges. Forgive someone not for their sake but for your own. Be good to yourself. I consider myself fortunate that I've never had to draw on this quotation. I expect it's much easier said than done, but I appreciate the idea that
"Living well is the best revenge." 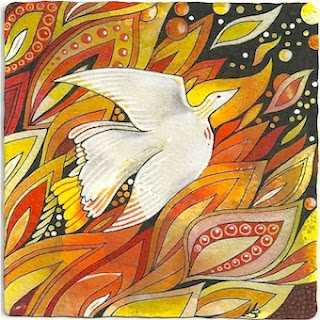 You may be familiar with the book "The Little Prince". If not, try to borrow a copy. It's short and it's fun. And the author, Antoine de Saint-Exupéry said,

"Love is not gazing at each other.
Love is looking together in the same direction."

"Knowledge is limited. Imagination encircles the world."
An actual quotation from Albert Einstein, as far as I can determine, unlike the popular "Logic will get you from A to B. Imagination will take you everywhere." credited to him (which I kind of prefer, but oh well).

"Anything is possible, one stroke at a time."
The tangle Crusade, from CZT Wayne Harlow, flummoxed me for quite some time. Others have had this challenge with tangles such as Skye and Amazing Spider. But I liked it enough that I kept at it, eventually understanding it well enough that I can now do it on curved lines and in wonky strings. Yay me!


"The well-being of the world, its peace and security,
are unattainable unless and until its
unity is firmly established."
You may have noticed this one in my e-mail signature. It's from Baha'u'llah, Founder of the Baha'i Faith. I've been a Baha'i since I was 19. I love going barefoot when possible, on a sandy beach or grass at a park for example. I feel more connected to the earth.