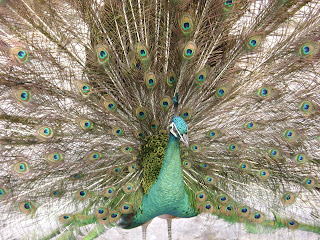 Some time ago I was in need of a tangle that called to mind a peacock's tail. You can see that project here. There were a couple of tangles I knew about*, but neither was quite what I wanted, so I designed this one. The version in the tile below is very slightly different from what I finally decided upon and, of course, there are always variations.

Ize (pronounced like 'eyes') is certainly a 'high-concentration tangle' and has more than six steps - sort of an ideal maximum for a tangle. In fact, there are really two sets of steps.
First is the offset grid, composed of large and small squares, which is an interesting beginning pattern in itself that could be filled in many other ways. It's what I call a vessel tangle. It was first shown in BrixBox from Anneke van Dam, and recently in Reticulous from Heidi Kay. I'll let you check those posts for the slightly different grid step-outs.
Here are two tiles I did recently using this offset grid for a Square One focus on Facebook.
The second step is filling the small and large squares.
The smaller squares are simple. These steps are even a little different from what I used in the colored artwork, but I prefer it.

The larger squares are also fairly simple, but there are a few more steps. 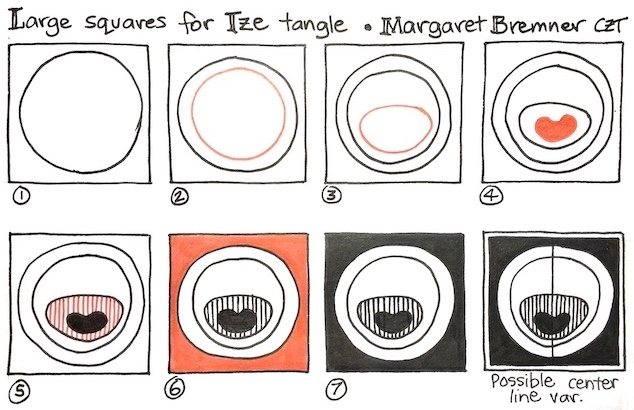 You might find it easier, or prefer the look, to draw a central spine before drawing the second circle, oval, and 'bean'. You can also draw the large circle so the edges touch the square. And you can nestle the bottom of the 'bean' against the previous shape.
Here's Ize larger, and on a bit of a curve.
I've been staining tiles with hibiscus teabags, and this is one of those. The first image is basic Ize with no shading; the second image is with embellishments and shading. I used a Gelly Roll pen for the purple fills; I find it a nicer purple than the micron, which is almost black.

* The other tangles that call to mind peacock tails? One is Pavonia (from Angie Shade). Another is Peafea (from Amélie Liao).

BTW: It's getting harder and harder to keep track of tangles and names. If this pattern has been presented elsewhere, or if the name has been used already, please let me know!
Posted by Margaret Bremner, Artist at 11:44 AM