It's a hashtag, too! #prestrungfun. Have a look on Instagram and Zentangle's Mosaic app.

"Pre-strung" means that there are pale, gray lines provided on the paper so you have a string to start with. Zentangle(R) offers many tiles like this.

This project ("challenge"), the brainchild of three CZTs, is based on one of Zentangle's pre-strung zendala tiles, pictured below. I admit, this is not one of my favorite pre-strung strings, but I had two white ones so I thought I'd do two. Why not? 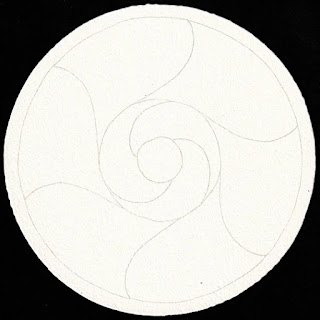 Sometimes an idea grabs my collar and whisks me away on a wild ride of creativity. Usually when I don't expect it. This was one of those times. I found myself working on one tile while ideas for another one flew at me.
Come along for the wild ride with me...

The first two I did were on white tiles. One is at the top of this post. Here's the other.
I tried using the tangle Kahla as another string, wondering what would happen if I tried to overlay two strings.

I wanted to do more! I hunted, and discovered I had some tan and black tiles with this pre-strung string. The first began with smears of copper ink from a leaky pen; the second was going to be the 'mosaic' border and something else in the middle, but you know how things go!

It worked well with Kahla, so on this tan tile I wanted to try using Within as an overlaid string.

Colorful ribbons wanted to play on a white tile.

And finally, on a tan tile, sort of paisleys. And more. A lot more.

I understand there will be another Pre-Strung Fun event. Hope you can join in!

Posted by Margaret Bremner, Artist at 11:18 AM