I've been having fun trying things with the new tangle Auraknot.

In this one I began with a pentacle using the Cadent variation shown by Patty Meijer recently. I put Black Pearlz in the circles. Then I did Auraknot on both sides of the original bands, and kept doing that until I had a ball shape. (I wasn't thinking of a ball when I began.) It seemed to need more detail/interest so I added some different tangles in some of the strips.

Again I started with a 5-pointed star, but wanted to interweave it with a square 'border'. I also wanted to try the idea of making some of the bands black, as if they were empty. Sorta worked.

Exinside was another tangle I wanted to try. I began this tile with Exinside - you don't need graph paper; fly solo! - and it looked as if I could add Auraknot very nicely. So I did.

Posted by Margaret Bremner, Artist at 8:00 AM 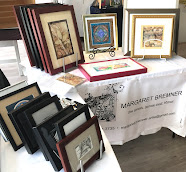 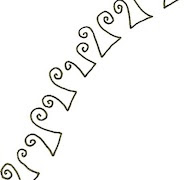