It's been almost a year since I was in Whitinsville for the Zentangle teacher training seminar. One of the other participants was Maria Vennekens from the Netherlands. One day she wore a shirt with a lot of patterns, and I noticed something like this among them. To me, the initial 'X' with the filled-in top and bottom looks like an hourglass.  Thus "Dutch Hourglass".  If the pattern is big enough I like to put tiny black dots in each of the white dots, but - of course - it's your choice. Here's how to do Dutch Hourglass: 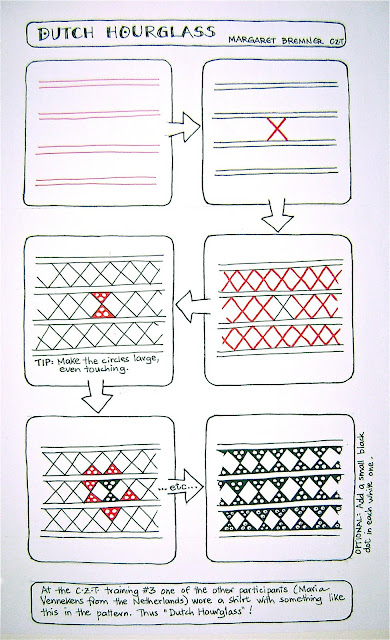 In the first, the tangle is used as a field in two sections of the string. If you do this tangle, be sure to make the stripes/diamonds/triangles a good size. You need room for the three circles.

At the top left of this tile you'll see a "tangle" that I'm calling Botched Dutch Hourglass Resurrected.  :-)  I didn't make it large enough and had no room for the white circles, so I filled the triangles with black, which was too bold so I added large black dots in the middle of the diamonds which toned it down but was still rather bold so I gave it lots of shading.


Here again I've used it in a ribbon. I think it's those 2-pencil strings I started with. Another interesting thing in this tile is two slightly different effects with the tangle Tidings. In the top right it's done with only lines. In the lower right I've filled the tiny extra spaces with black.


Overnight on April 26, I'll be winging my way to Halifax to visit my recently-married daughter and her husband for ten days. After that it's Bermuda for a week to visit my husband's sister and her husband. You bet I'm taking lots of Zentangle supplies with me! I'll need to do some creating myself, and who knows, maybe I'll get a chance to share it with others. Interspersed with visiting, whale-watching, board games, Peggy's Cove, snorkelling, restaurants, and touring of course!
Posted by Margaret Bremner, Artist at 8:19 PM