This past weekend I had a yard sale. There are a lot of different names for that; we also say garage sale, although neither yards nor garages are sold. Apparently some in California call it a Meet Swap, which I and a friend initially understood to be a Meat Swap and pictured people arriving with lamb chops and sausages and chicken legs saying, "I'll give you four of these for six of those." :P What do you call it?

I awoke Sunday morning, having dreamed of two interesting tangleations of Assunta. (Obsessed? Who? Me?!?) I decided to draw them while sitting in the glorious late summer sun at the sale. Well, as often happens, something that makes perfect sense in a dream makes no sense whatsoever in the light of day. I tried this and tried that and tried other things, but no luck. The lovely dream tangleations weren't going to happen. And they were so pretty!

BUT... I DID come up with a few other very nice new tangles!!!

Cadent is a lovely tangle with a scroll-like look. It lends itself to lots of variations, some of which you can see here. I sometimes like to use two lines rather than one. Although it looks nothing like Cadent when finished, this new tangle reminds me of Cadent the way it begins and it looks somewhat dance-y. I mixed up the letters of Cadent and came up with Dancet. Here's how to draw it. 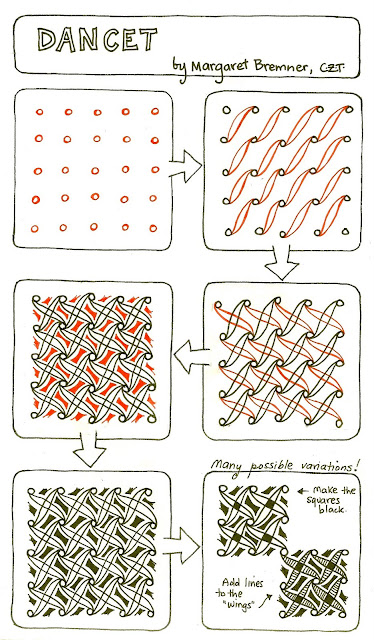 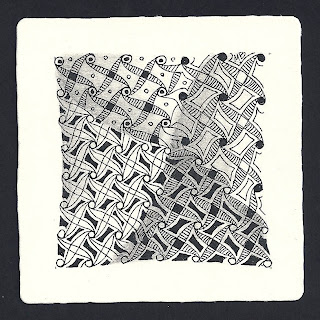