This idea popped into my head one morning: circles with a crescent moon shape on one side and the non-moon shape filled with something and a black background. Since there is already tangle called Crescent Moon (one of my favorites) I mashed the words together and came up with Croon. It's quite a simple tangle pattern with some careful blacking in. 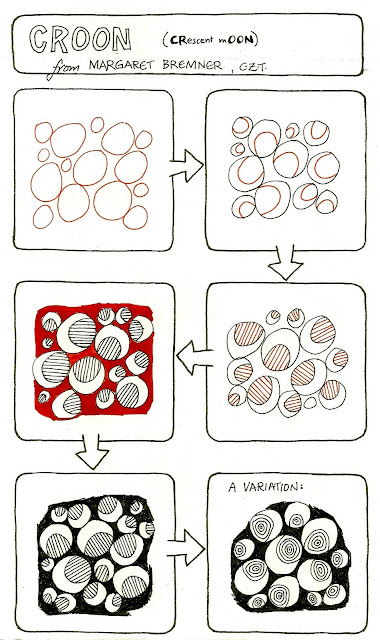 I think the variation above has a 'seed pod' look about it.
Shading can be added on the inside edge of the non-crescent part.

Here's Croon at work. On both tiles I've added a few tiny white circles amongst the "croons". Makes it a bit more outer spacey. It would be fun to mix Croon and Suzanne McNeill's Moon Rocks (scroll down).
In the next tile I used both the original Croon and the variation shown in the drawing instructions.

Posted by Margaret Bremner, Artist at 1:00 AM