Stippling is a delicate drawing technique with lovely results. In this technique the drawing is composed entirely of tiny dots. Some very impressive shading can be accomplished this way.


Christine Farmer does a lot of pen and ink work using stippling. You can see examples of her work here. She says, "Stippling as a technique requires precision, skill, and concentration, and I like the fact that progress is necessarily slow and steady." Sounds rather zen, doesn't it?
Noli Novak frequently does illustrations for the Wall Street Journal employing this technique.


Some superb artwork can be created using only stippling. BUT... it can also be used in small amounts. It's a terrific way to achieve an effect in pen and ink that is other than black, white, or lines. Some time ago I tried a very simple Zentangle tile using only stippling. For the string I overlapped two 8s. There is no pencil shading. 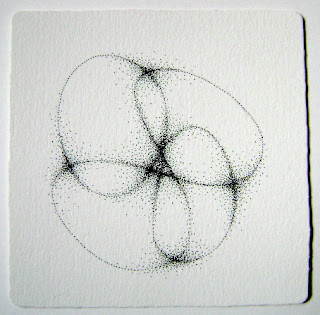 CZT Donna Hornsby's tangle Keenees uses tiny dots... basically stippling. When stippling in Keenees you can go darker into the corners, like this: 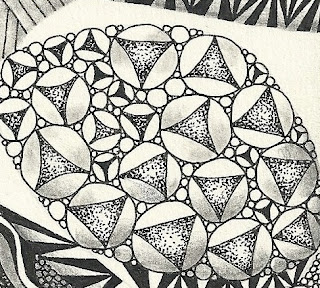 I thought it would be interesting to do some Zentangle tiles entirely in stippling. I found it has a sort of misty look. I think I could be a little bolder with areas that could be more black. Both these next tiles were done using a 01 pen, with the exception of Zedbra on the left which was done with a 08 just to see the difference. I used pencil for the shading.

Next, I tried a normally-drawn tile, but did all the shading using stippling. I still much prefer the effect of pencil, but stippling can be a good option for shading should you find yourself with only a pen.

HOW TO?
Simply use your Sakura Micron (or similar) pen, hold it vertically (not slanted) and with a light touch tap the pen tip on the paper. Many, many, many, many, many times. :-)
More dots in one place gives darker areas. Fewer dots, lighter areas. You can use different sizes of pen for varying effects. If an area is to be quite dark you may want to begin with a larger pen to fill space faster, then switch to a tiny pen for finishing.

There is a little more about stippling from Canadian CZT Geneviève Crabe on tanglepatterns.com here.

Finally, here's a two minute video showing the development of a portrait done entirely in stippling. Prepare to be amazed!


Hero from Miguel Endara on Vimeo.
Posted by Margaret Bremner, Artist at 10:30 PM