Black and white. Half and half. 50/50. That's this week's challenge from the DivaCZT: try to keep the artwork in equal balance.

I haven't had much success with this (maybe I was trying too hard) although I don't mind my first effort. I chose tangles that were fairly equal black and white, but had to made a few adjustments once they were on the paper! I also tried out TanglePatterns string #53.

Then I thought of using a white tile and a black tile, half and half. I eyeballed a shape that looked to be about half the tile and cut it out with an Xacto knife. Then I drew an identical shape on the other tile and cut it out. Then I taped the black shape into the white tile and vice versa. Cool. I like the idea and may use it again, but I'm not particularly happy with the results in terms of this challenge.

The first one here is the white shape in a black tile. The equal black and white made the whole tile too monotoned so I grayed some of the background. Having darkened that, I thought I should lighten something else, thus the white dots in Bunzo (which I like!). Interesting, but still too monotone. On to the next one.

Here's the black shape in the white tile. I did one tangle a much larger scale than the other, which I think helps a lot. I again added some gray on the background, and did some white highlights on some of the black squares. I found that if I let the white ink dry really well and went over it a second time it was whiter. I love what I've been seeing others do for this challenge and I'd like to tackle it again later.

But here... here's my idea of Ebony and Ivory in true perfection. These are the children of a friend, a fair-haired, fair-skinned Canadian married to a lovely dark Haitian. Aren't they absolutely gorgeous?!?!? 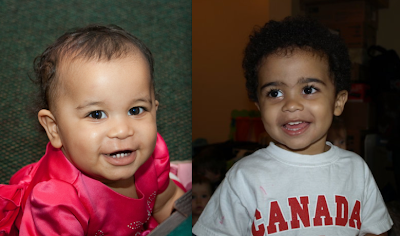