Why did I think this would work?

While I was away on vacation I did this tile... 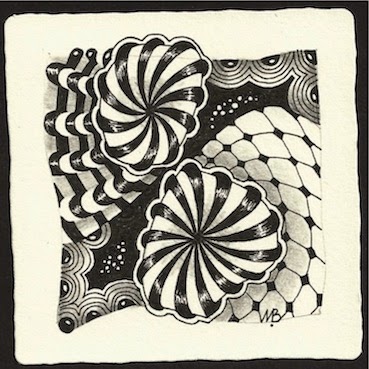 ... and really liked the Romanancy outside the Aquafleur. I thought it would be quite interesting to combine the two tangles, doing the stripes of Aquafleur in Romanancy's bumps and flats. I chose a round Renaissance tile and drew a large wobbly circle for Aquafleur, then pencilled in the lines of its stripes.

Why did I think that would work? As soon as I began the second row of Romanancy it dawned on me that Aquafleur's stripes go from the center out, while Romanancy's go across the pattern. But I persevered.

Romanancy had to disappear into oblivion in the center, which wasn't going to work, so I ended up with a flower-thing in the middle. That's okay, maybe even good, as it's something different to look at.

I put Auras around the big shape. I like that effect with Aquafleur, but also wanted to separate it from whatever background I used.

Initially the background was all basic Tipple - black ink circles on the tan paper. I added white and gray. Why did I think that would work? It was way too monochromatic. I decided that the border needed to be darker so I blacked over a lot of the circles, thinking I'd add white circles back on.

But I had left too many tan colored circles, so to darken them I drew Black Pearlz in many of them, leaving a little crescent moon highlight instead of the usual oval. (I do like that!)

There still wasn't enough definition between the large shape and the background, so I made the second Aura white in a further attempt to lift it away.

Romanancy needed more contrast so I used a Zenstone to highlight the bumps. It was lovely, but not light enough so I used a white Prismacolor pencil.

The tan of the tile is pretty much lost. The 'curl-over' tops of Aquafleur are also lost. And it's still too monochromatic. 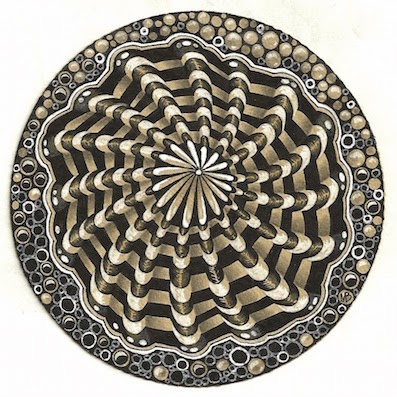 Posted by Margaret Bremner, Artist at 11:28 AM