This week's guest challenger on the DivaCZT blog is Sharla Hicks. Sharla's challenge is to use a C or S curve tangle and to work in a series. This is a wonderful way to push the boundaries and discover other ways of doing the same old thing. I usually find myself doing this with a monotangle or duotangle challenge. I get on a roll and one tile makes me think of something else that could be done.

When I read "S-curve" I knew immediately which pattern I would use, although it's one I've rarely used. It's called Mambo, and was designed by Helen Breil. I discovered it when I was hunting black-and-white patterns in between discovering Zentangle and becoming a CZT.

Here's my original note about Mambo, and how to draw it. 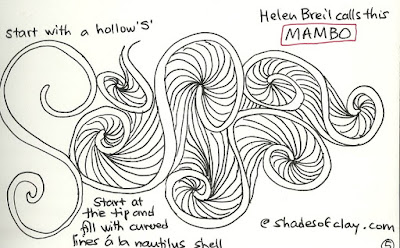 #1 - I used a simple, 3-line, lightning bolt string across the middle. I wanted only two variations per tile so I could see them easily. First I did Mambo as Helen did (left side), then filled alternate stripes black (right side). 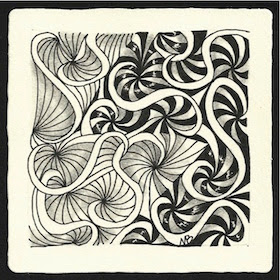 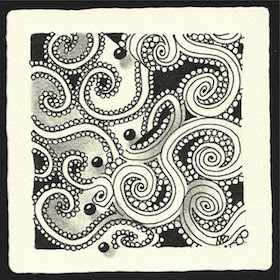 #3 - An easy way to vary a tangle is to vary the scale, so I did Mambo smaller, and larger. 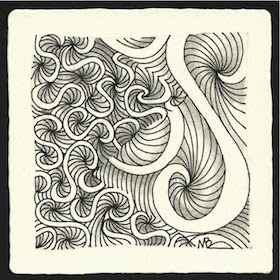 #4 - I thought Mambo could be interesting as a border and tried that, small and large. The tangle in the center is my latest, Pixioze. 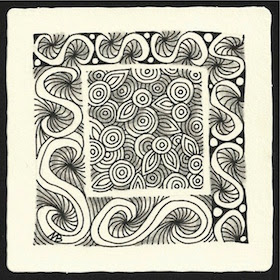 #5 - Then I thought, "The S's don't have to be empty" so I filled them with stripes (top).
In previous tiles some of the 'S's connected in ways that seemed like ribbons and I decided to explore that idea further (on the bottom). 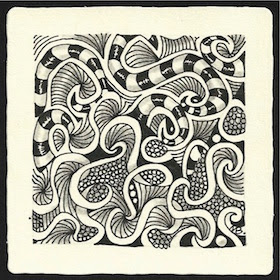 #6 - Then I thought, "S's don't have to be curvy" so I did them with angles and corners (left). Then I realized that the angular S's could work in a rectangular grid (right). I experimented on the back of the tile first! Okay, not undulating, but still cool. 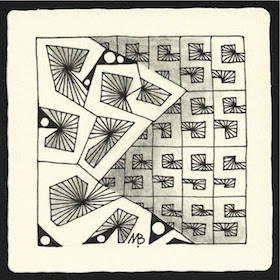 #7 - Filling in those two loops of the 'S' with stripes reminded me of Aquafleur, so I did one like that. If you look closely you'll see that the lightning bolt division is horizontal.

#8 - Then I thought, "It doesn't have to be a Roman letter S" so I did the only other one I know, an Arabic S. (My husband and several other people were having a meeting upstairs, so I was holed up in my basement studio for three hours. What can I say. I was becoming somewhat Mambo Undulation Variation Punch Drunk by this point!)
#9 - Then for some reason I thought of Hollibaugh and decided to overlap some S's. It didn't really work out that way but I tried some other interesting ideas: curvy Knightsbridge, Aquafleur again, and a dovetailed corner (like Hibred).
At around 11:30 pm I decided I should go to bed.

The next day... yes, seriously. I was still thinking Mambo and S's and undulations.

#10 - Pencil outlines. I decided to use the S's as a string, although in the end many of them got outlined anyway.
#11 - Then I noticed my computer wallpaper, a fabric swatch (isn't it gorgeous!?!?!) with spirals (like S ends, no?) with rolling zigzags on the outside. 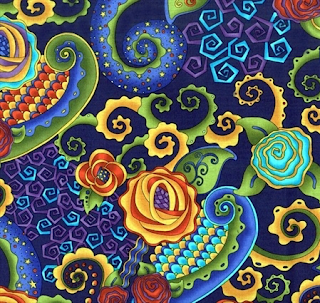 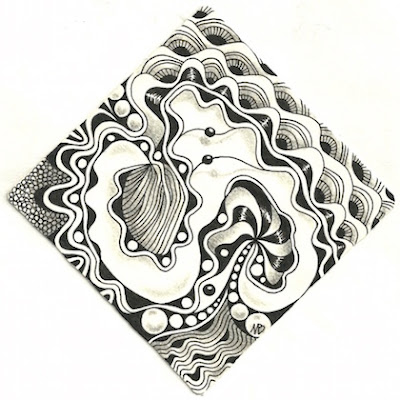 I think that's all folks. I hope so. I have other things to do. Thanks Sharla! I'm not sure if this is what you had in mind, but I had fun. :)