Niiice! GNEISS, and then some

GNEISS - and then some

Gneiss is a tangle from Zentangle that looks like a star with aplomb. One of the things I like about it is that the original guideline disappears in the final tangle.

I'm thrilled and privileged to be attending zenAgain, a special event for CZTs (Certified Zentangle Teachers) in Newport, Rhode Island. A similar event happened some years ago and I missed it, so I promised myself that if anything like it happened again I would really try to go. One of the things I shared is some of these variations on Gneiss.

There aren't step-outs online for this tangle so you may need to seek out a nearby CZT to show you how it's done.

MORE POINTS
Gneiss is often done with eight points. That's easy to do by simply drawing a 'sliced pie'. But you're not limited, of course. Try more points. You can do twelve by drawing two lines in each quarter instead of one. 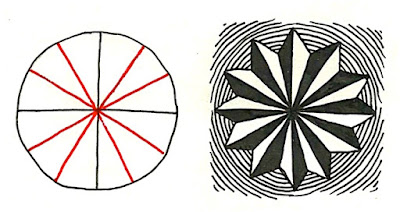 MORE POINTS, DIFFERENTLY
You can also have more points by adding small ones in between the points of your classic Gneiss. This gives you 16 points. You can see this in the tile at the top, too.

A GNEISS COMET
Your lines needn't intersect at (more or less) the center of the star. Try an off-center center.
Put a dot somewhere in your circle and draw all your lines through there. You may want to put little ticks on the circle indicating the 1/8 divisions. Curve most of the lines, and don't forget to curve the lines of the 'V' too, as well as the second set of lines to the center. 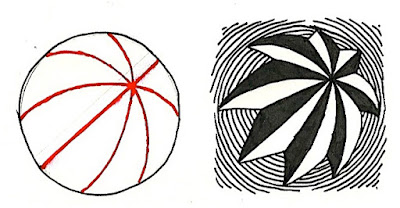 GNEISS-LY IRREGULAR
I generally think of a 'V' as having sides of the same length, but try slanting it. This will give you uneven star sections. You can decide if you want more white or more black showing.

A GNEISS PINWHEEL
Instead of straight lines from the perimeter to the center, draw arcs. Two arcs make a sort of 'S'. You'll need to really curve the 'V' you cut out of the ends. Also curve the second set of lines to the center.

Here are two tiles showing possibilities with this pinwheel variation. In both cases I've wrapped the end of the point back into the star, such as you'd do if drawing Phicops (scroll down the post) or Aquafleur. 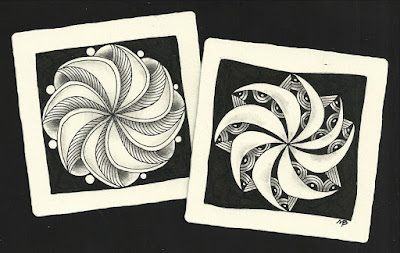 A GNEISS LOTUS
Instead of doing the 'V's with straight lines try doing 'bracket' lines, such as you'd do if drawing Copada. 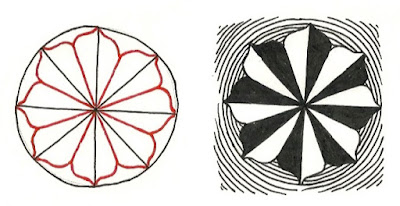 GNEISS FILLS
Instead of the classic alternating black and white, try different fills. Here's one with white circles instead of solid black. 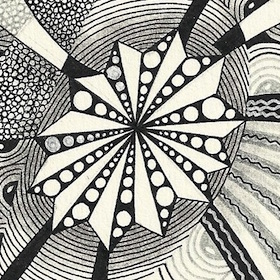 You can use a tangle with a lot of lines as a fill, but in that case I suggest using either black or white as a background, depending on which is not in the star. See the two tiles under 'A Gneiss Pinwheel' for example. Here are some Bijou tiles with Gneiss variations: 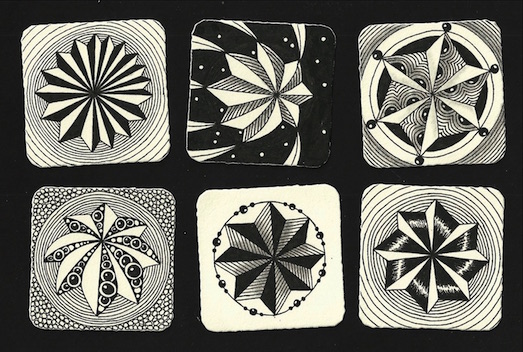 HAVE A GNEISS DAY!
Posted by Margaret Bremner, Artist at 12:41 PM