ECHOISM, and then some

Echoism is a very simple tangle,
and as such is wide open to variations.

FILL THE SPACES
The classic method is to add an Aura and fill the non-loop areas with black. But you could fill them with something else. The spaces are usually square-ish, so a segment of a square grid tangle is a natural choice. Two of my favorites are Cubine and Dex, but there are plenty of others. 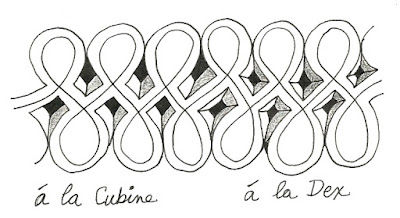 FILL THE LOOPS
Oh my, so many possibilities! Here are a few:

ALTER THE LOOPS
One simple way to vary the look of Echoism is to change the look of the loops. To begin with, they can be drawn compact and rounded, or stretched and skinny.

Try overlapping the loops. You may already have done this out of necessity when your lines were "too" close together!

The loops don't have to be all the same size. 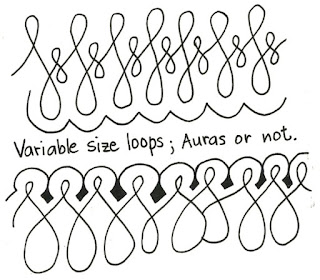 Make the loops pointed instead of rounded. 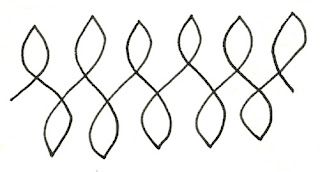 Instead of a single loop, make a double loop. Add an Aura. Fill the background. Or the loops. Or both.

Make the loops a different shape. Here are triangles and diamonds...

...and hearts!
You can also make pinched loops. I find it's tricky to keep track of which direction I'm going and which way to loop and when to pinch. I should just slow down. You might make a "mistake", like I did in the second example below. But "mistakes" are opportunities and can usually be turned into something more interesting than your original idea.

Here's my best advice, and it has nothing to do with Echoism. (and it's what I did above):  If you make a glaring 'mistake' somewhere, do it again deliberately two or three more times. Then it looks like a cool, original, creative thing you planned, and did on purpose. Just don't tell anyone. ;)

ADD TO THE LOOPS
No need to leave the loops plain. Here are some ideas. 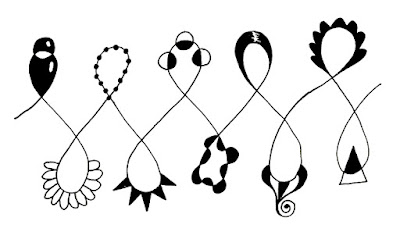 USE AURAS
I've used an Aura in some of the examples here, but you can totally go to town with the Auras, too. 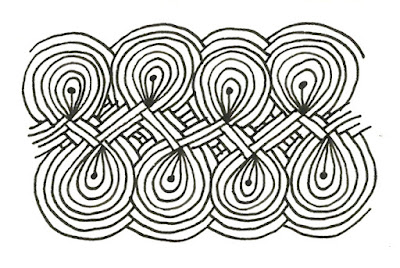 Once you've done an Aura, add something outside it. Here are two ideas, Perfs, and something akin to Sanibelle. And Auras don't need to be thin; try wide Auras.

ABOVE ALL, HAVE FUN!
One variation I thought of, and then forgot, is to do Echoism twice, alternating sides. You can see this idea on Donald Wilka's (CZT) blog here.

Posted by Margaret Bremner, Artist at 8:51 AM