I've recently begun participating in a Facebook group called the Travelling Tangles Project. I tangle part of a tile and send it to someone, and they do the same for me. Then we complete each other's tiles. I've received some very interesting 'beginnings' that I've been privileged to complete.

Here are some tiles I've received and how I finished them.

Pat Floerke in Nicaragua sent a zendala tile that she'd begun using blue, green, and purple ink as well as black. I used more. :) She began with Finery and Tipple and I added Pearlz, something related to Maryhill, and a sort of triangular Well with one side different!

Fellow Canadian Susan Szathmary sent a tile with a blue-green wash and some zippy green gems/pebbles. As soon as I placed it on the beige oatmeal paper to scan it I knew it had to be a shore scene. I added Floo for clouds, Tipple (Caviar version) for sand, and a tangle that's not public yet for waves. 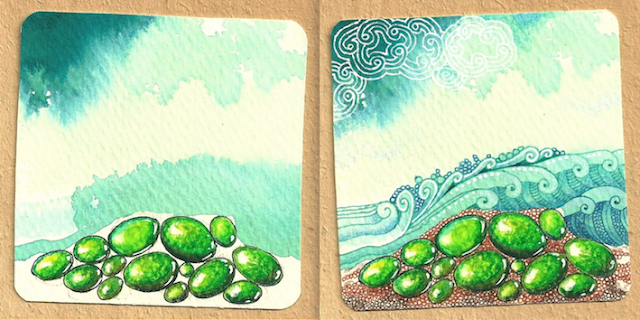 I received a tile from Barb Mavraganis with spatters of dylusions ink. To her Mooka and Zenith I added Pixioze, Ruutz, and more Zenith. 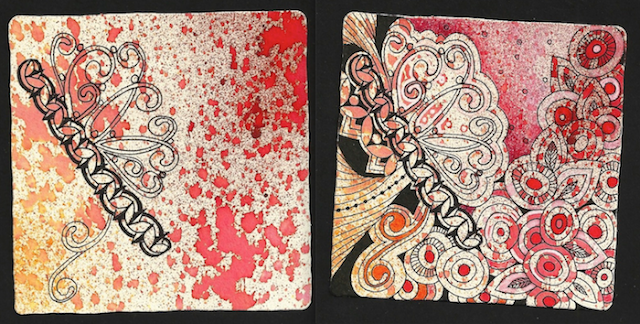 Loretta West sent a classic black on white tile with some delicate, ribbony tangles. I stayed with that theme, but the center seemed to want to be darker.

Finally, here's an ATC begun by Debra Huff. I kept seeing trumpet-shaped flowers so I went with it. 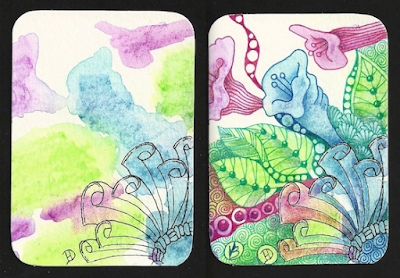 In a future post I'll show some tiles I've sent and how others finished them.

Posted by Margaret Bremner, Artist at 11:37 AM