How "Prairie Sun" came to be

Some years ago I saw a beautiful quilt while visiting a quilt show with my mother. I quickly drew the pattern on a zentangle tile I had in my purse. I wanted to do something with this design later. 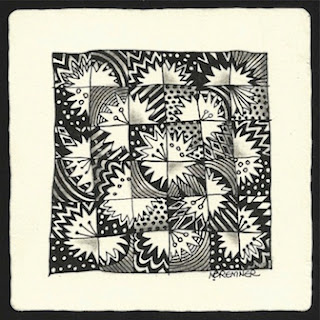 Eventually, I decided to do each square (or 'quilt block') on a separate tile. Of course, I wanted to do this in color. I used a compass so that all the circles would connect rather than having irregular joins.

Earlier, I had done a black-and-white piece of tree trunks and branches, and decided that this would be the same size: six tiles square, mounted on a 24" canvas. Here are the 36 tiles, randomly scattered,  before I did the pencil shading. 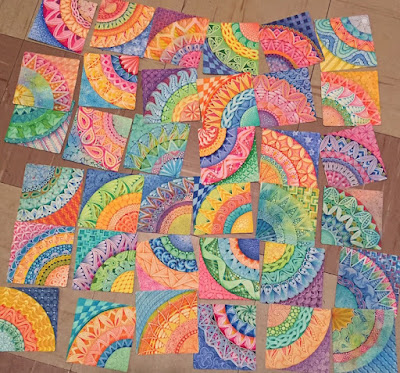 There are a number of different designs that can be made with these squares by turning them in different directions. I tried a few and decided I liked best the regular concentric form. It took a lot of shifting and turning to arrive at the final arrangement with colors connecting where I wanted them to. Little colored brads are placed at the intersections of the tiles to mask the rounded corners. 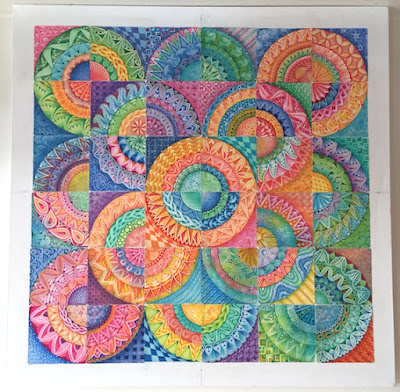 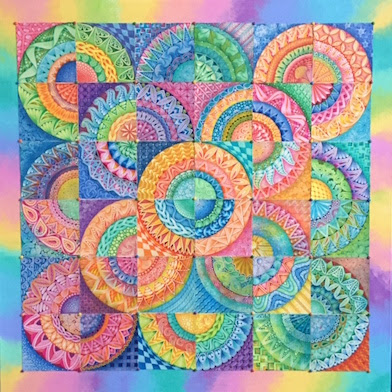 Well... no. I did not like it. It sat in the studio while I looked at it for two weeks before I decided that it was channelling My Little Pony way too much. I painted the sides of the canvas black as a means of separating the surface from everything else, and echoed the circles keeping some of the mottled color but painting the rest of the background white. The white is iridescent and not quite opaque so you get a hint of the color underneath. I think now the tangled squares have more prominence. 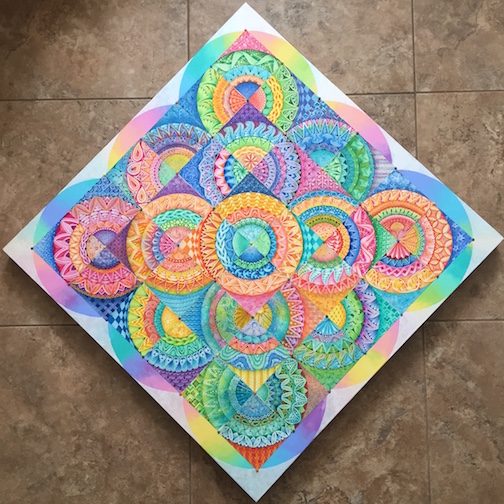 The last thing I did was to replace the small round brads with larger square ones, placed diagonally. Now it's finished! Here are a couple of details of the final piece. 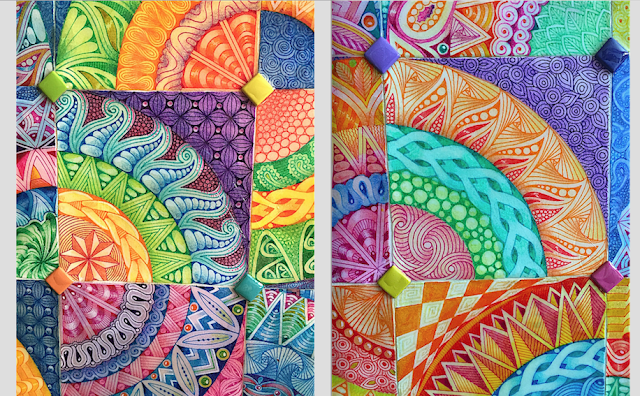 And just for fun:
On another tile I had drawn a quick idea of the quarter-rounds and some possible tangles. It's on the left below. I don't think it was particularly useful, and I was about to throw it out when I thought, "No, I could do more with that." The end result is on the right, below.

Posted by Margaret Bremner, Artist at 10:44 AM