Cute as a button, and a delightful way to go around in circles and create a type of mandala!

I first saw this type of idea from Chris Titus, a CZT in the United States and major organizer of the Square One groups on Facebook. Her idea involved using a paint-spinner gadget to create concentric color streaks that could be developed into tangled mandalas. She calls them spundalaz. More on that in a future post.

Marguerite Samama, a CZT in the Netherlands, has a zenbuttons tutorial on tanglepatterns.com, here. As I don't have a paint-spinner gadget, Marguerite's tutorial inspired me to try the zenbuttons.

Zendala tiles seemed like the right thing to use. Here's my first try:
I'm not very happy with it as the white highlights don't show up well. I think my black ink was still a bit damp and the white pencil smeared it slightly, leaving gray instead of white.

The second try turned out better. There's a little more dimension to the rings but still not enough for my liking.
I came across a pre-strung zendala tile I'd begun a long time ago. It hadn't held my interest, but I didn't throw it out. I wondered if I could adapt it into a zenbutton so I divided it into concentric circles and completed the tangling. Here it is the way I'd left it, and with my ink drawing done.
I altered the color of the perimeter ring as it was too bright. There's much more satisfactory dimension in this one. I'm improving! 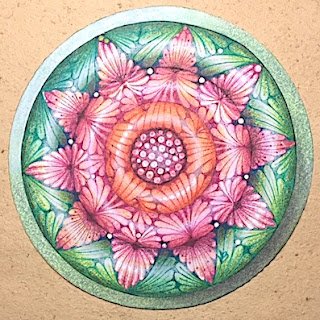 I had a wonderful eco-dyed tile, a gift from Chris Titus some time ago. The rusty circle was so lovely as-is I didn't know what I could add to improve it. Aha! Zenbutton! Here's the tile, with the concentric rings I drew to begin. 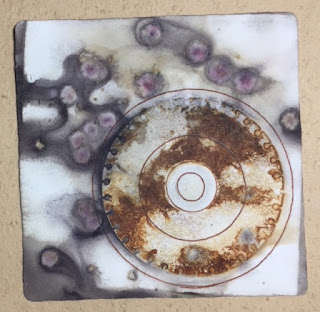 And here's the result: 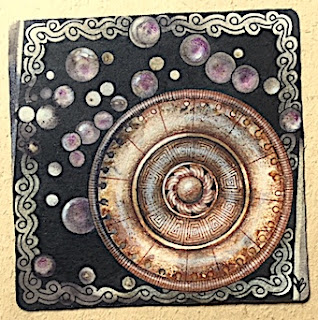 I'm pretty happy with it, although sufficient dimensionality is still an issue I think.
Posted by Margaret Bremner, Artist at 2:13 PM