For a while now I've been interested in the Japanese design principle called Notan, the judicious use of light and dark and the balance between the two. This can be a very equal, 50/50, balance, or you can be a little more liberal in its interpretation.

During Zentangle's Twelve Days of Zentangle in 2017, the 9th day's project involved splicing together two colors of tiles and I'm using that idea in the following examples. You can see a few more examples (using black and tan tiles) here.

To start, I take a black tile and a white tile, place one on top of the other, and carefully cut them apart. Here are two tiles. There are two others with the colors reversed. 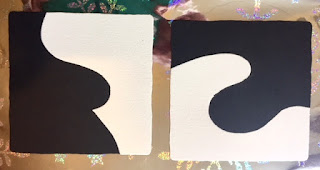 Using the two companion tiles to the ones above, here are two completed tiles.
During InkTober this year, one of the prompts was 'breakable'.
Another prompt was 'double' and Notan is a kind of 'double'. Also, I doubled it and did two, one in only black and white and one bringing in color. On the colored one I used metallic inks on the black paper. 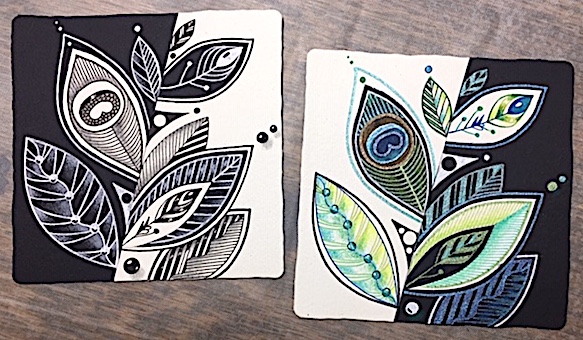 I find this a fascination process, and shortly I'll show you some pieces using this method with houses as subject matter (you know me and houses!).
Posted by Margaret Bremner, Artist at 1:31 PM