Square grid reticulae, and then some

There are so, so, many, many tangles based on a simple square grid. This is a wonderful way to begin because it gives a basic structure to work within, even beyond the string lines. To change it a bit, there are interesting things you can do to a square grid that give it a different character, and make it less recognizable as a grid.

Idea #1 - CURVY
One possibility is to leave the straight lines behind and do the grid with curvy lines. Here are some examples.

Idea #2 - SHAVED
Shave off alternating sides of the squares, like this:

Here's a tile with four examples. Sometimes it looks like tightly woven bands - like W2 without the black square 'holes'. 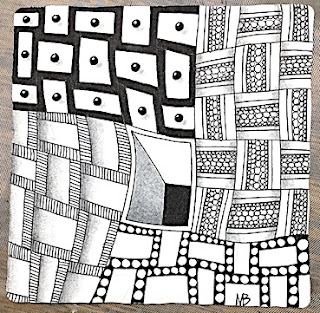 I like to fill in the strips so the intersections of the original grid are not obvious. That means black, or something with a black background. Here's an example of a grid with curvy lines, and solid black with Pearlz filling the shaved areas. 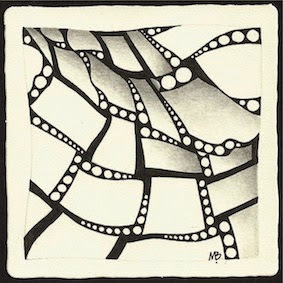 You can add detail to the shaved-off slices (as above), or the remains of the square, or even both.

IDEA #3 - IRREGULAR
Another way to add variety and interest to a square grid is to vary the width of the stripes. Alternate a wide stripe with a narrow stripe, gradually change the widths, or be random.
IDEA #4 - OFFSET
There is a grid with offset large and small squares. It definitely takes some concentration to set up, but it's not too difficult and it's fun to work with. I used it in the tail of the peacock here.
Check out BrixBox from Anneke van Dam. Anneke's steps for setting up this grid pattern are well done and rather than reinventing the wheel I'll let you go to her blog to see it, as well as some lovely examples of ways to fill this grid pattern.
Have fun!
Posted by Margaret Bremner, Artist at 9:00 AM