Possibly the main issue with 'Nzeppel is: Where do you put that darned apostrophe?!?!

The shapes created by this pattern look a bit poofy, especially when you add shading. Sort of like... a zeppelin airship! Take the "in" off the end of zeppelin and put it at the beginning and you get Inzeppel. In English when we eliminate a letter it gets replaced with an apostrophe (don't, isn't, they're, you're) so when we take away the 'I' and add an apostrophe it becomes... 'Nzeppel.


This is the LZ-126, the largest zeppelin yet. It was christened in November 1924 and was included in the list of active ships of the US Navy. It remained in active service until 1940 and was the most reliable American airship ever. It made 331 flights and accumulated 5,368 hours of flight time.

'Nzeppel in its original form leaves all the little stars showing at the intersections. A key factor when drawing the rounded shapes is to draw the entire shape. It's tempting to simply round the corners and be done, but speed is not a goal of zentangle. Take your time and draw all around. This means you'll be drawing over lines two times. You can see the effect in the tile below; note how the lines of the stars in the intersections are thinner than the lines connecting them. I'm including a detail shot too.

VARIATIONS / TANGLEATIONS
A simple variation is to fill the intersections black, as on the right on the tile below.
Try drawing 'Nzeppel larger and add some fills.
In the tile below you can see: 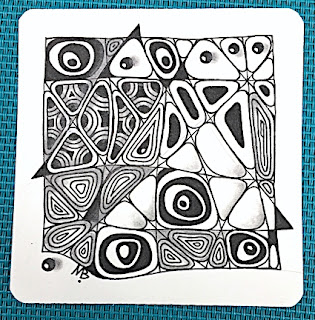 For an interesting different effect, draw the grid lines in pencil instead of pen. Then draw the shapes, leaving a space between all the lines. When you trace around the shapes, tracing over most of the pencil lines, rather than inside them all, helps hide the pencil marks.

Cockles'n'Mussels is a tangle I developed based on random 'Nzeppel. The shapes are filled with lines that cause them to resemble shells: cockles, mussels, and clams. 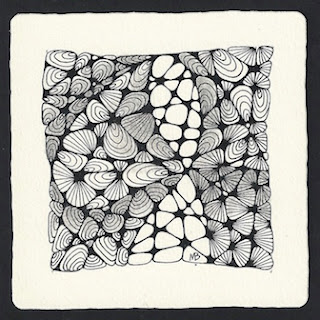 Do a large version of 'Nzeppel and, using the original square grid pattern, fill the sections á la Knightsbridge.
Forget any sort of grid and just use the string you have, draw 'Nzeppel's X-lines through it, and go with the flow. Here's a string I drew and the tile that resulted. I added a few lines as needed.
Go and have a different kind of flying experience with 'Nzeppel!