We do make mistakes. But that doesn't mean we have to abandon the entire project. There's almost no mistake that you can't do something with, and maybe even make it better.
This concept is a 180 degree turn from my attitude 35 years ago in University. If I did something I hadn't intended I'd often scrap the thing and start over. An important message brought to me by Zentangle!

First, here are two"mistakes" that my students have made.
Once in a while, learning the tangle Florz, someone puts the little black squares in line with the square grid rather than doing little diamonds at the intersections. 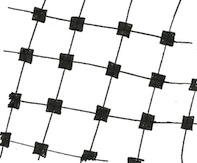 It's a rather interesting variation. And as proof that it's really not a mistake, here's a floor I saw in a historic building. 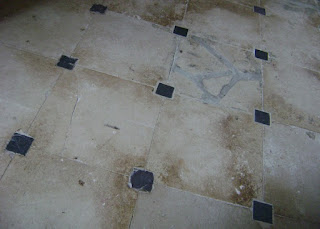 When drawing Crescent Moon, occasionally someone will think the Aura lines go all the way down to the base line all the time rather than keeping the Aura happening, with space between each row of lines. It's an interesting, tunnel-like variation. 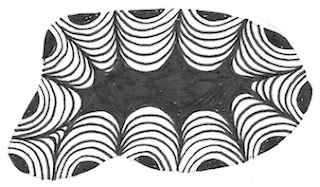 Seven ways to deal with something displeasing.

1. Shade.
Besides adding wonderful dimensionality to your art, shading is a great way to hide or disguise something that's a bit disappointing. Go to the dark side with your pencil.

2. Overlay with a tangle that is mostly black.
Of course you'll think immediately of Bronx Cheer, usually done in raspberry form, but demonstrated here as a border pattern.
Or try Punch from Sandy Steen Bartholomew's book Totally Tangled. Simply draw some circles around parts you do like (or do a regular pattern of circles) and fill the rest of the area with black. I used a variation in the darkest section of the tile below, where I'd done something I just didn't like. Maybe try squares or triangles. If there's a LOT of black, refer ahead to idea #6.
3. Try the Tranzending technique.
You can watch Rick and Maria demonstrate it here. It will still leave a lot of what you already drew showing, but perhaps you can draw a heavy line over your "mistake" - and add some heavy shading. ;)
4. Do it again, and again...
Made a little booboo? Do it again a few more times and it will look as if you intended it as a cool "Oooh, look at that!" kind of thing.

5. Accept it. Be creative. Deal with it.
Accept what happened, see it as an opportunity to be creative, and make something of it.

Necessity is the mother of invention.
In the tile below, the tangle Chebucto went haywire at the left end. I'd put some lines on the wrong side of the black squares. But it's interesting how the tangle interlocks at one end and flies off in ribbons at the other. If I hadn't told you, you probably would have thought I intended it. :)
6. Cover it. Then maybe tangle on top of it.
Use black. In the tile below I didn't like the pink sections; they seemed to take away from the yellow/orange. I blacked over them, then used a white pen to draw spirals. Other details completed it.
Or try another opaque ink. Sakura's Metallic ink pens cover well. Here are before and after pictures where I felt the dark blue Diva Dance (top left) was the wrong color, so I used silver and blue metallic ink to cover it, and added more for balance. (Now I'm not sure which one I prefer!)
7. Channel your disappointment and carefully chop it to bits.
If I've been working on something that has its good points, but I'm generally not happy with where it's going, I cut it up and make bookmarks or ATCs. I also save bits for future collage.
Here are four bookmarks made from very different beginnings. 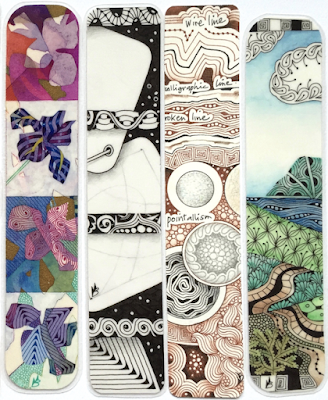 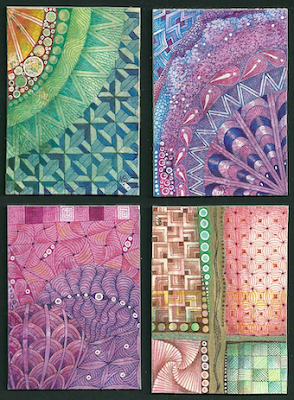 No mistakes, right? Only opportunities to have fun and be creative.
Here's wishing you a year of creative 'mistake' making!
Posted by Margaret Bremner, Artist at 5:05 PM