Revisiting the golden mean through Project Pack 11 was such fun I wanted to do more!

The pack contains a "markus operandus" for locating the phi proportions on Zentangle tiles. Markus Operandus II can be downloaded here, for free, at the bottom of the page. I've added marks to mine so I don't have to rotate my paper in order to indicate all the phi lines. I may have it laminated. It looks like this. 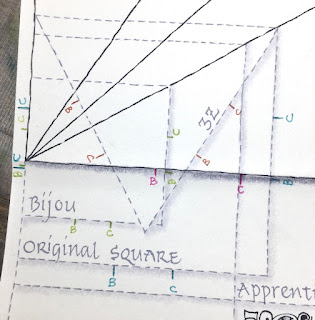 It can be used not only with the new Phi tiles, but also with the classic square (also apprentice and bijou) tiles, as well as the triangular 3Z tiles. I wanted to give them a whirl.

The proportions work on a square just as well as a rectangle. I'd done this years ago when my focus was mandalas. With the mandalas I used all four phi lines to create the working space: 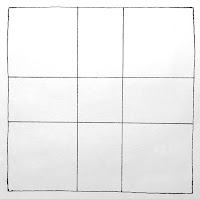 Here's a mixed media painting from that time using these phi ratios.

I've been fascinated with sacred geometry and the golden mean for many years. Delighted to revisit it in this project pack, I created a number of square tiles.

Using the same four lines as above I did a classic-size tile. You can see Hollyhock in the corners, Icantoo in the rectangles, and the center connects it all.

I had a gray tile with a mauve wash. It struck me that somewhere near the 'center' of the flower shape might be a phi intersection. Here is the finished tile, with backwards steps to the mauve wash.

This is an eco-dyed tile that I subdivided into various phi-measured sections. I used Moonlight pens and gold ink as well as brown and sepia micron pens. 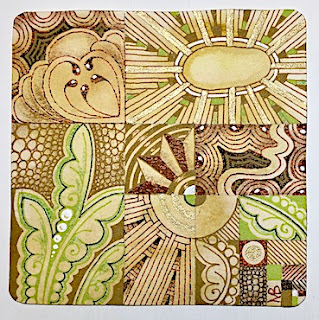 But triangles? The kit says it works with triangles, too. I don't see why not, but I'd never thought to try it before. On a rectangular shape, there are four phi intersections (shown above). I discovered that with a triangle, there are three. 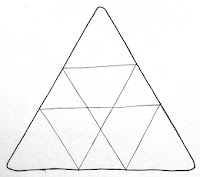 The black and white 3Z tile below has the tangle Ayame, but instead of beginning it at the center I began at one of the intersections. On the tan tile, I used the six notches at the perimeter as places to begin the droplet shapes. 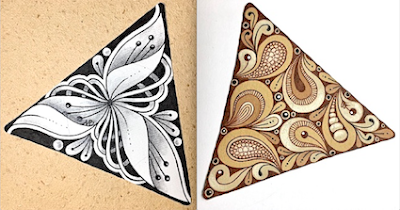 I'm grateful to Zentangle for reintroducing me to divine proportion. I plan to do a lot more with these measurements.