When I returned home after three weeks away, Project Pack 11 was waiting for me! I quickly opened it to see what treasures lay inside. Of course! Why didn't I think of that? Phi-dimension tiles! I love sacred geometry. I even have some golden mean rulers.

Having been away, I found myself rather inundated with Things To Do and wasn't able to enjoy this immediately. But eventually I had a great time!

Day One: Dividing the tile according to phi ratios and drawing Pokeroot (I used Pokeleaf).

Day Two: Drawing the tangle Gourdgeous along one of the phi lines. In Canada we call this a "goord" while in the US it's a "gord". I've realized that the name of this tangle is "gorgeous", not "goordjus"! 😜

Day Three: Drawing on the back of the tile, following pre-strung the nautilus spiral using Crescent Moon. I got inspired and drew a Gourdgeous nautilus spiral on the "back" of this tile, actually the intended "front". 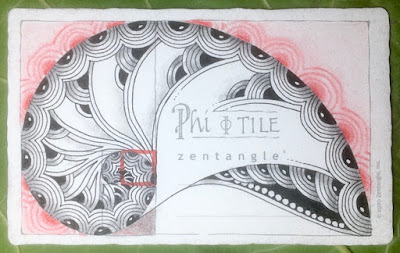 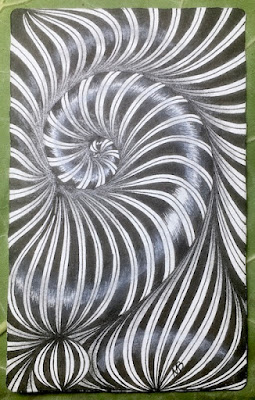 Day Four: Drawing a Hollis-inspired, droplet-ended Mooka, then adding color with colored chalk pencils. I added a border of Doodah. On one of the phi intersections I added the tangle Within in gold.

Day Five: Ing, along one of the phi lines, filling the triangles in various ways, then adding color. It's interesting how it  ended up in the center of the tile anyway. I like Ing a lot, so I did two. 😊 In the first, two phi intersections are indicated by the Black Pearlz; in the second, by the Pearlz rings.

Day Six: Drawing a square around one of the phi intersections and creating a square grid around it.  Then, filling alternately with Cubine and a variation of Well, sort of. 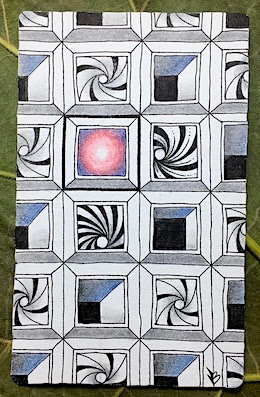 Day Seven: A diagonal line passing through two of the phi intersections, then subdividing the tile into smaller and smaller phi squares. In the leftover spaces in the center I kept seeing rectangles, so I drew the lines and added random Jalousie. 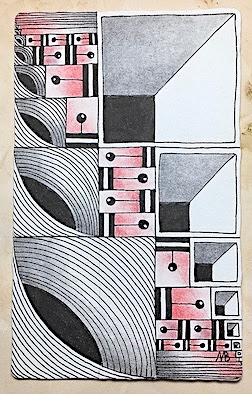 Day Eight: Molygon, and more, centered on one of the phi intersections. I couldn't not see a flower here so I added Icantoo. 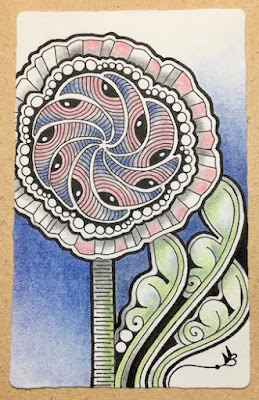