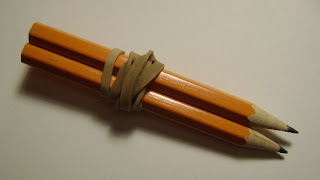 Now here's a fun idea!
I used an elastic band to hold two pencils together and drew strings with a double pencil. I found that - with curving, and changing angles - often one or the other pencil would skip, so I'd have to add that bit of the string once I'd finished the main part.

In the two tiles below you can see that I also did the initial border with the double pencil. The double pencil gives a really interesting ribbon effect to work with. The tile on the left has a 'loop' string; at the center is my Lotus Pods tangle. The one on the right uses the familiar 'Z' or 'N' string -  much of it is filled with Tipple - and the center has my Ninja Stars tangle. 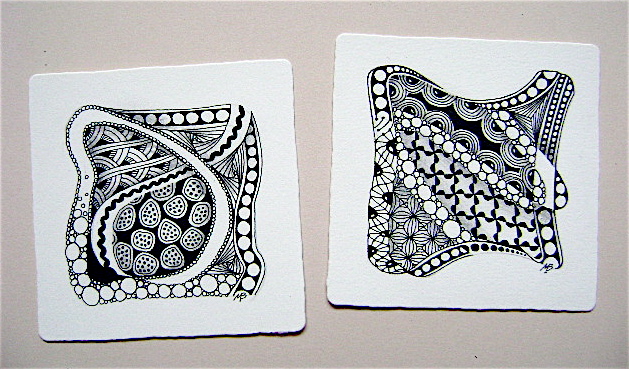 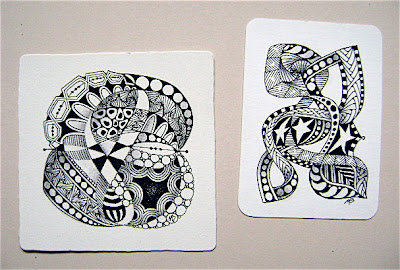 Here are a tile and an ATC I did using a two-pencil string. On the tile I used two '8's for the string, overlapping at right angles. It's an interesting string, although it can make the center a bit crowded. You can't see a lot of the ribbon effect of the double pencil, except that there's a lot more string than there might normally be! 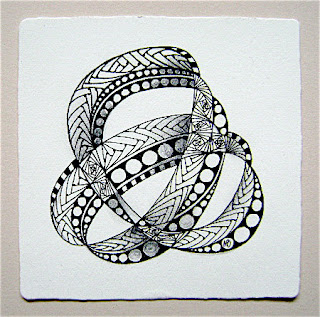 On this tile I used the double pencil twice. I drew a two-pencil trefoil string. Then I placed pencil-tip-A where pencil-tip-B was on the first go-'round, and drew the same string again, following the first string's pattern. Clear as mud?
Posted by Margaret Bremner, Artist at 4:12 PM