I've always like those old Chinese coins with the square hole in the center. The hole helped keep the coins together as they could be strung on a cord or ribbon. When our youngest daughter finished high school and all three daughters had plans, my husband and I went to China for two years to teach English. They don't use coins with holes in them anymore but I bought a small handful of old ones at a street market. The yuán is the unit of currency in China, thus the name of this tangle.

The Yuán dynasty was founded by Mongol conqueror Kublai Khan, who was the first to unite all China as we now know it. At its peak the dynasty's territory surpassed 12 million square kilometers (4,633,226 square miles for Americans) and ranged from Siberia in the north to the South China Sea, from the Pacific Ocean to the Middle East. Kublai Khan was a ruthless conqueror (weren't they all?) but he was also a great supporter of science, was interested in various religions, commissioned the design of a Mongolian script - until then strictly an oral language - and headed the first government in the world to institute paper currency.

In 1271, at the age of 17, Marco Polo left Italy and travelled overland with his father Niccolo and uncle Maffeo - who were gem merchants - to the near and far east. Marco stayed in China for 17 years in the employ of Kublai Khan and was one of very few Europeans to witness first-hand that traditional period in China.

Here's how to draw Yuan. I admit to using a circle template when drawing the instructions, but if you look at the examples you'll notice that the squares and circles can be quite off-center and still have the desired effect! It seems to end up rather larger than I expect it will; just a heads up. If you want to pronounce yuán correctly in Chinese, with the rising tone, say it as if you're asking a question: yuan? 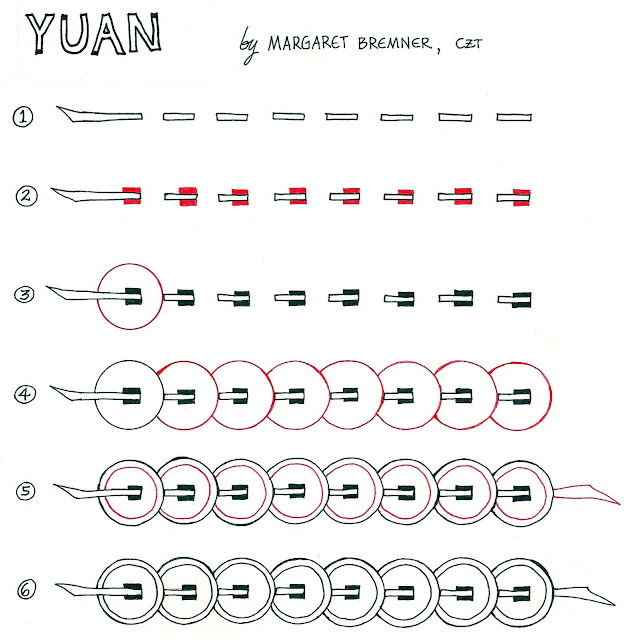 Blake is newly named. I used and mentioned Bettie Lake's 'ribbons' in an earlier post (third tile). I contacted her recently to ask if this pattern had a name and, if not, might I suggest "Blake"? It didn't, and she agreed. :-)

So today, also introducing the tangle Blake! Here it is in brown on a bookmark I made recently.