While attempting the 75th Zentangle weekly challenge - to use Cadent - my brain went off in other directions and instead presented a few lovely variations of Cadent. For another very cool variation of Cadent, see CZT Patty Meijer's blog here.

Some of the things my brain sprouted are so different that I think they warrant their own name. I'll be sharing them this week.

First up, FUNLS, which probably bears the most resemblance to Cadent. Say 'funnels'. I think we owe our non-English-first-language tangle buddies some explanations of the odd/oddly-spelled names we come up with for some tangles! A hint: frequently they are rather phonetic and don't use the frequently bizarre English spelling. :) 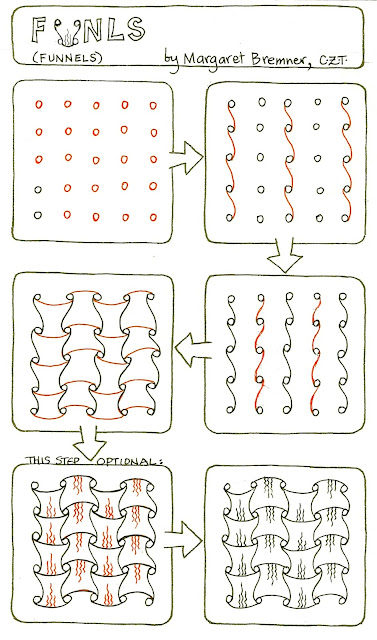 For shading, go to the base of the squiggly lines. Here's a tile with Funls:


Posted by Margaret Bremner, Artist at 6:00 AM