Yikes! I found this, half-written, in my draft posts. It had fallen out the bottom of the screen and I'd forgotten about it. Now it's finished and ready for you, dear readers. :)


Some months ago Suzanne McNeill asked if I would be interersted in contibuting artwork to the next book about Zentangle from Design Originals. Are you kidding?!? YES! She asked me to use some of the new tangles that would be in the book, so I got a sneak preview and have been trying to hold back from using any of them in work that I've posted between then and now.


However, Zentangle 7 is published and available and now I can share! 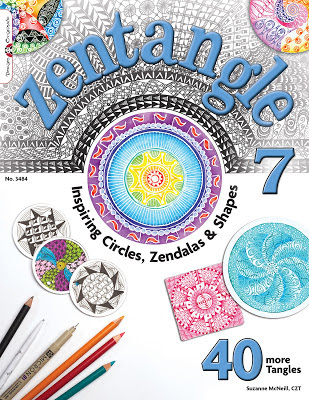 Here are two mandalas that I have in the book, showing some of those 40 new tangles, in situ.
This pink one (it's on the cover!) is on a standard 3.5" tile. I used Prismacolor's Magenta pencil for shading. I began with an apple corer as a template. (Search 'apple corer' under my Labels for more examples.)

This multi-colored one was done on a blank Zendala tile, and again I used the apple corer as a template, adding the smaller circles and the outer ring. The new tangle Firecracker (love it!) reminded me of the outer ring on some Tibetan mandalas so I chose pen colors that reminded me of those also. Besides the basic colored pens I also used black ink, white ink, some metallic inks, and colored pencils for shading.

Suzanne did a video to promote Zentangle 7. You will recognize these two pieces in it! In case you haven't seen it, here it is.

In the video Suzanne demonstrates a method to create a six-pointed mandala. I tried this idea using a peanut butter lid and a Zendala tile.
That piece is another example of how different, and better, something can look with shading. Here it is, before and after: 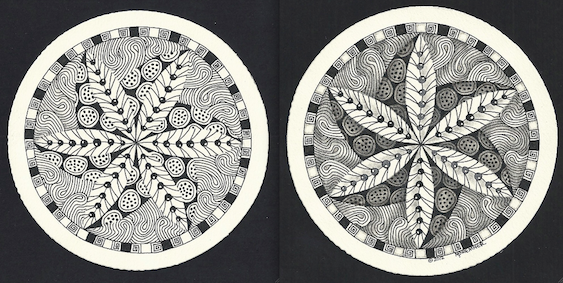 And another one. Here I added some "pearls" and black gems.