A simple challenge this week from the DivaCZT: draw pencil stripes on the tile. This is your string. Tangle it. Of course, the simplest idea can lead in surprising directions!

I used my 'double pencil' on the first tile. It gave me some rather small square sections. A few of the lines were darker than the rest and it sort of looked like a mat. I used Hollibaugh to separate the squares and Msst for the fringe. The border began with Seljuk, which I really liked until I added other things, then the white was too white.
Next time I gave myself larger squares, but drew the lines blind. I thought about how many square grid tangles there are and decided to do one square of a tangle per section. Knightsbridge and Seljuk are scattered throughout.
I spotted some black tiles on my desk, and since I almost never do white on black I decided that would be a good change. I drew the pencil lines, which of course looked like a square grid to me, not stripes. I thought of W2 and decided to use the black paper as the black squares and tangle the rest of it.

So I drew all the lines in white and was intending to add highlighting in white and be done with it. Then color popped into my mind and I decided to do some ribbons in color. Then all hell broke loose. Multiple colors! Black Glaze pen in the black squares (it makes the black so-o-o much deeper)! Two-tone gray highlighting on the other ribbons! Metallic inks at the edges of the colored ribbons!

I really like it! Believe it or not, there is very little of the original black paper showing alone. 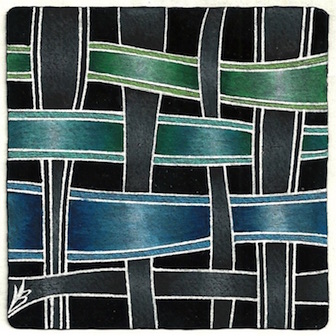